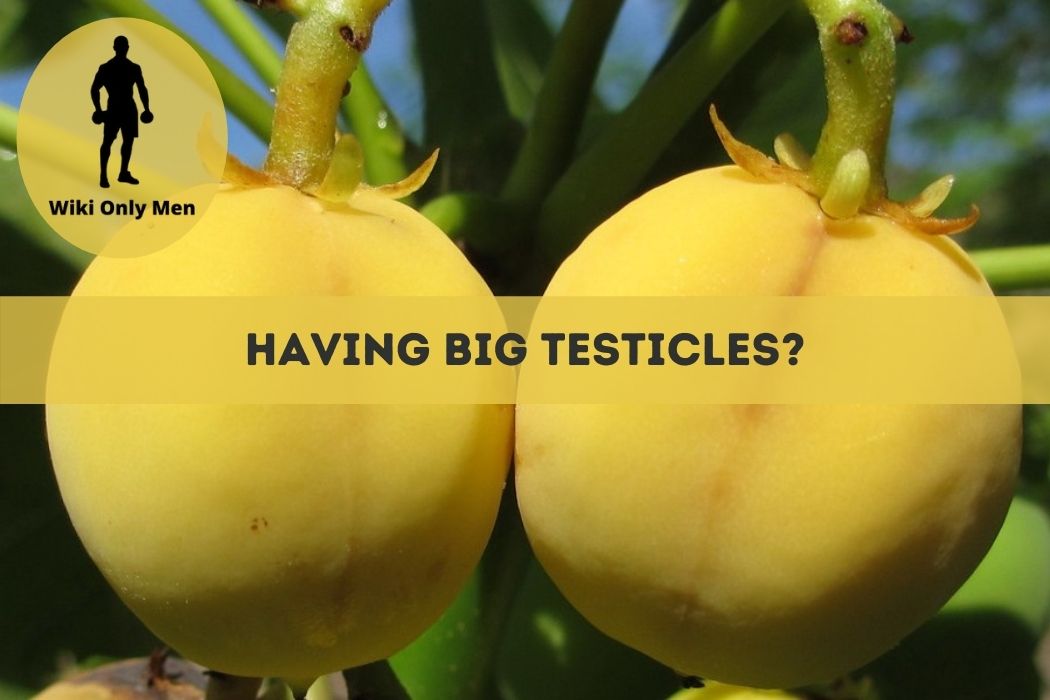 Genetically, some men have testicles larger than the average size. (I am not considering a medical condition, like any sudden change in adult men’s testicle size can be alarming and needs a doctor’s attention.)

Here I am talking about natural and healthy giant balls. And having big testicles are quite common and pretty normal.

Men are often compassionate about the size of their anatomy, especially when it comes to their genital organs, and to be more specific about the penis. People want to make sure they compare to other men and are large enough to satisfy their partners.

But what about the testicle size? Men seem somewhat confused regarding testicle size. If they think their balls are either too large or too small, they may not welcome any.

Still, most people are more worried about small features than larger ones.

What Does ‘Large Balls’ Mean?

Like all other body features, testicle size may vary from person to person. For your easier understanding, I will mention the male ballbag’s (or scrotum) overall size that contains two testicles inside, typically. The average volume of human ballsack is somewhere between 60 ml to 90 ml. Most men are in the middle of this range.

So anything beyond the 100 ml volume you can consider as massive.

It is still usual to have a scrotum of ping pong balls size to tennis balls size.

For your convenience to compare, a ping pong ball is 30 ml, and a tennis ball is 150 ml in volume.

The Upside Of Having Large Testicles

Some men have rather large testicles. Some good things can come from having big balls.

If a man has more giant balls, he can produce additional levels of sperm. Larger testicle men can more easily impregnate a woman. Having big balls means that the man is capable of releasing more sperm. More sperm will provide an increased chance of conception.

Some evolution theory reveals that, among great apes, who are the closest relatives of humans, the larger balls’ owners produce more competitive and potent sperm. Hence, they conclude men with massive balls have more powerful sperm.

A man with large testicles has a high sex drive. There is a biological reason behind it. Larger testicles are capable of producing a higher level of testosterone. Testosterone is the male hormone that plays a vital role in regulating sex drive and other masculine traits.

Studies were conducted to look at the size of a man’s testicles and his sleep quality. It sounds funny, but a proven fact is, men with large testicles can sleep well. People with more massive balls had fewer interruptions and reported a better quality of sleep. So, keep bearing your precious family jewel and enjoy your sleeping.

Self-confidence is a psychological benefit of having large testicles. If a man has large testicles, he may not want to admit it, but he can feel proud inside. Everything in the male anatomy that is large usually makes a man feel good!

A riveting psychological phenomenon, isn’t it?

Once men are psychologically stable, they will feel more masculine, and they will have more confidence in the bedroom. Thus giant balls can allow a man to enjoy his masculinity.

But, indeed, having a massive scrotum is sometimes embarrassing for many men. Yet, a large ballsack gives the majority of them a pleasant feeling.

Is it really? Yes, some women look for men with larger testicles. They feel that the more giant balls a man has, the better he will be in bed (this is only a belief, and there is no statistical evidence.)

But I said only ‘some’ women prefer so. They like men that are larger and enjoy the sexual response they get from men with big balls.

The Downside Of Having Large Balls

Yes, there are some downsides to having larger testicles also.

Research from Italy divulges that there is a link between heart disease and large testicles. Men with larger testicles are susceptible to cardiovascular illness.

Researchers suspect an indirect connection between these two factors by luteinizing hormone (LH) secreted from the pituitary gland. A higher level of this hormone increases the risk of heart disease and stimulates testosterone production, thus endowing testicle size.

Higher testosterone production and larger testicle size are closely interconnected. And now, the researchers found they are linked with the risk of heart disease. How complex the chemistry of a human body!

I am not sure it’s a piece of bad news for the large balls’ owners themselves or for their partners! Men don’t want to be jerks but cannot resist! The reason for this obnoxious behavior is hidden inside their balls.

BBC documentary producer Tim Samuels is the author of a book named ‘Who Stole My Spear?’ There he describes how primates with more massive balls tend to polygamy. He relates how men with large balls are more polygamous and inclined to cheat their partners.

Yes, this is a bitter fact! Carrying a 250 gm bag that is hanging between thighs is not an easy task. Having giant balls can be very uncomfortable, especially while you are sitting.

For cozy moves, you’ll always have to wear tight underwear at work or in the gym and sports. Yet, the awkward bulge in sportswear and swimming costumes can embarrass people who don’t enjoy this sort of show-off.

Are you facing a problem with your dangling balls? Read it: Get The Best Underwear For Testicular Support – Make Snugly Moves

Wellness is the key to a happy life. Your sexual and emotional happiness doesn’t depend on just your testicle size. If your giant balls give you confidence and a feel of satisfaction, enjoy it!

There is nothing to be worried about large testicles unless they grow larger unexpectedly in someone’s adulthood. However, if you are in your teenage and feel your testicle size is abnormally large, don’t hesitate to consult with your physician. Similarly, prolonged pain, swelling, or irritation in balls should be taken seriously, and consult with a doctor.

Otherwise, keep enjoying fun times with your gigantic buddy. Have a healthy life.

1 thought on “Having Big Testicles, The Upside and The Downside”