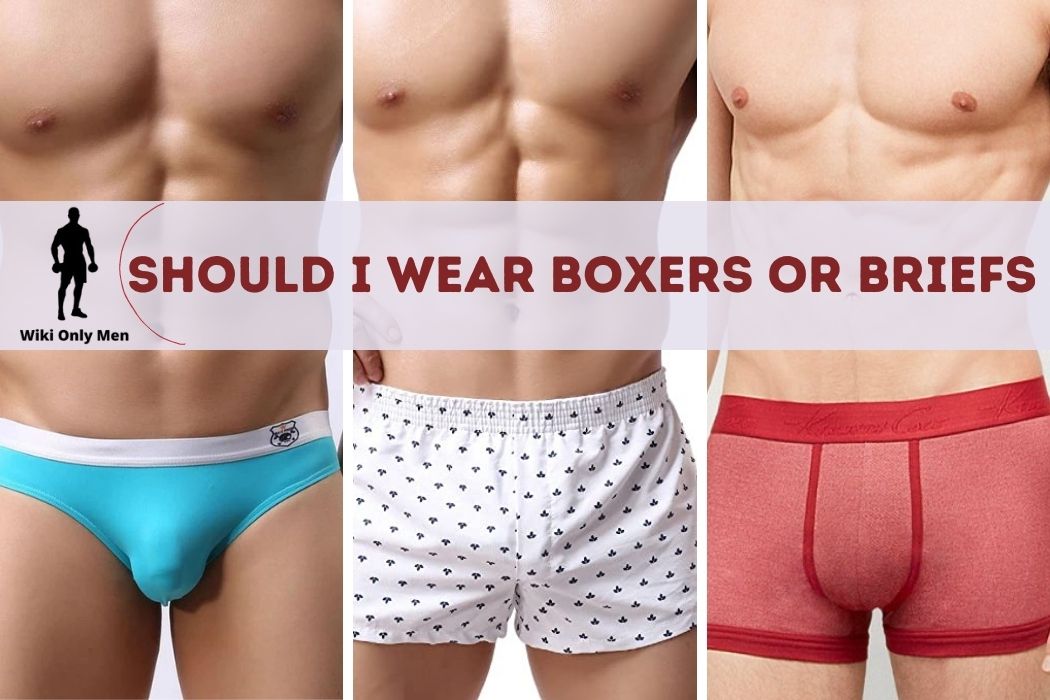 You’d think there’s not much to know about underwear – wear it, change it, wash it, repeat — but there’s actually a lot more than most men realize. And whether guys go for boxers, briefs, or live-to-go commando, underwear is probably the last thing on their minds.

You probably already know how often you should replace your underwear, but there are many different styles and shapes.

We will change that with our briefs vs. boxers vs. boxer briefs duel. We’ll examine each type’s function, comfort, beauty, and sex appeal to finally solve this age-old question.

Should I wear boxers or briefs, or boxer briefs?

Which one is the best option?

Which is the most relaxing?

Which one is the most popular among the ladies?

It’s a contentious subject. And probably you don’t know the solution.

But, you can still compare these types of underwear to see if you can figure it out.

Each form of underwear, including briefs and boxer briefs, has ups and downs (like your snake in the trouser.) But, on the other hand, choosing the right sort does not have to be complicated.

Continue reading to find out why.

It pits all three underwear styles against each other based on five parameters.

Definition: The level of support they provide for your manhood.

Let us all keep the big picture in mind when it comes to comfort. It’s much more than just feeling at ease. When we’re walking or moving around, we need to offer our manhood the required support.

The perfect underwear should do more than just protect and keep the goods in place. It should also give you peace of mind knowing that your crown jewels are receiving the royal treatment they so well deserve.

If you’re continually adjusting your underwear through your pockets, you’re wearing the wrong underwear.

Briefs stand out from the crowd when supporting your prized possessions. That’s because they grab your guys tightly and firmly hold them at all times.

The better they are made, the more mobility you will have. Listen to soccer legend David Beckham describe tighty-whities: “They’re comfortable.” I think they’re fantastic, mainly when you’re playing soccer.”

But when it’s hot outside, the tight fit of briefs can rapidly become uncomfortable. And even a single lap of running can cause your balls to get sticky and sweaty, which is not comfortable for long-term use.

Briefs and boxers are the polar opposites of one other. Boxers leave your cherries dangling, and they’re always as exposed as a low-hanging berry branch.

For older guys, this emotion is challenging to overcome.

Boxers are loose and comfortable enough to allow your balls to breathe and stay cool. It’s a mix of excellent and terrible.

Boxers are ideal for while you’re sleeping or won’t be getting out of bed. But, aside from that, they are simply lacking in support.

Other men may appreciate that you’re not wearing anything down there, but this is a two-edged sword. You can read – Effects Of Not Wearing Underwear For Guys – Know Amazing Facts.

Boxer briefs are a hybrid of briefs and boxers, so they bridge the gap between briefs and boxers in terms of comfort. They give your things just enough lift to keep them supported throughout the day without restricting their movement too much.

They aren’t like boxers because they don’t leave your manhood hanging. You’ll notice the difference between jogging in boxer briefs and boxers.

Definition: How fantastic they appear on you (without pants).

While comfort is essential, most men are more concerned about their appearance. That’s because the appropriate underwear can transform your appearance when your pants are off. But, on the other hand, the wrong one can draw attention to your flaws.

If you want great-looking underwear, there are a few things to consider. First, your body type is a consideration. Is your stomach a little round or a little flat? Do you have a pair of thighs that are particularly large? Proportions are significant, just as they are with other clothing.

Briefs should not be worn unless you have the body of a Greek God. Keep the tighty-whities for high school students and men who have long given up on intimacy and excitement.

To appear attractive in briefs, you have at the very least have a well-built body!

Unfortunately, not everyone is blessed with the body of a Calvin Klein model or a professional athlete. It takes a specific physique to pull off short-sleeved underwear.

You’ll want something a little more padded that dresses up your thighs as an adult. Boxers are excellent at it. However, boxers might add weight to your thighs with all the cushioning they provide if you’re bigger or have a beer belly. Your lower body appears to be larger as a result.

For people on the thin side, boxers might assist in balancing out slight disproportions.

Boxers make most guys’ legs look like noodles spilling out of saggy underwear. So, the loose-fitting style is unappealing.

Boxer briefs are your most superb option in terms of aesthetics, whether you’re of average build, slender, or lean on the bigger side. These shorts instantly add some heat to your package and draw the attention of that specific someone.

It’s surprising how attractive they may make your legs look. They’re like slim-fitting shorts that accentuate your legs (especially if you happen to be fit).

We can thank Mark Wahlberg and the popular ’90s commercials he appeared in. He effortlessly rocked them, and many have found them appealing ever since.

Definition: How well they cover and secure your things.

Your underwear has two purposes: first, it protects your jewels, and second, it hides the little guy from prying eyes. Consider changing what you’re wearing if it does a decent job or occasionally fails at both.

They aren’t likely to have a wardrobe malfunction (unless they are wearing the wrong size).

However, they don’t completely cover the insides of your thighs, and the improper fabric might cause chafing, especially if you wear them for extended periods.

So, briefs are therefore excellent for both protection and support. But they fall short, however, in terms of preventing exposure and chafing.

When it comes to functionality, boxers are the worst. Unfortunately, countless men have succumbed to the lack of privacy provided by this baggy underwear.

In the gym, they may be quite a loose cannon! Consider going there in a pair of boxers and a couple of baggy shorts one of these days. You could be performing sit-ups and giving someone a complete view of your gems by accident.

Or you’re sipping champagne with friends and having the time of your life one moment. Then, the next thing you know, you’re cowering in embarrassment because your snake was accidentally exposed to an unknowing stranger.

Many of us believe that this sends out the wrong message. That’s not cool.

Boxer briefs cover the inner thighs and are often free of the problems that briefs and boxers’ problems.

Boxer briefs strike the ideal blend of protection and freedom for your guys.

Boxer briefs, unlike briefs, keep your inner thighs covered while not being overly tight. As a result, your belongings stay put, never exposed, and chafing is rare, if ever.

According to reports, Justin Timberlake tested all three before choosing boxer briefs. “The way they keep everything together,” he says, is vital to him as he sings and dances on stage.

Definition: What ladies most like to see their partner wearing is referred to as appeal.

Let’s get to the bottom of the elephant in the room. Some of you may believe that boxer briefs are the only underwear that has something to do with the high ratings. We can’t say we blame you.

So, let’s see what a GQ survey of 200 randomly selected women has to say about the sex appeal of each brand of underwear.

The ladies have had their say. And now is one of those occasions when we should listen to them.

Briefs are preferred by only 5% of women polled above other types of underwear. So it makes perfect sense when you think about it.

The majority of women prefer the other two when it comes down to it. It could be related to the briefs they’d see their father or younger sibling wearing at home. That’ll undoubtedly be a turnoff.

So, aside from the billboard commercials, many people don’t find them particularly appealing.

Boxers did better than briefs, but with only 19 percent approval, that’s not saying much.

Nevertheless, boxers are still a good option for certain males since they add weight to the lower body and can help balance out a hefty midsection.

They aid in adding weight to the lower body, which the females appear to like. This is especially beneficial if you have a large midsection.

Boxer briefs reign supreme when it comes to sex appeal. A staggering 64.5 percent of women stated they liked seeing their partner in these shorts for reasons ranging from how they can showcase muscles to how they make men look more macho.

As a result, boxer briefs triumph by a landslide. They’re the ones who make the majority of ladies swoon. This is the way to go if you have a solid build and exude enough confidence!

As one woman put it, Boxer briefs are “not too tight, not too loose”; they are ideal for this goose.

Definition: Versatility is the extent to which they may be used for purposes other than undergarments.

They resemble nothing more than briefs – it doesn’t make them versatile. Say you are required to leave your house or building in a hurry, and there’s no time for a change? People get exactly what they see.

Because they resemble shorts, boxers take the first position. They have air pockets that are similar to shorts. Wearing them will protect your inner thighs from the cold.

They provide a little more coverage than briefs. Although they still appear to be underwear, you could definitely get away with wearing them in case of any emergency (or to a friend’s house for drinks and pizza.)

Simple Guidelines On What To Wear Underneath

There are a few basic guidelines to follow for men’s health and underwear with that in mind. A relationship specialist and journalist, April Masini, backs up the commandment that putting out old underwear is necessary. She responds, “Your old underwear isn’t sentimental.” “It’s revolting.” Toss it out. Throw away any unattractive undergarments once a month. Gray, torn, and ugly. Remove it from your life.

According to Masini, this should be complemented by regular purchases of new undergarments. “In fact, get some new underpants every time you have a haircut.” Make buying new underwear a habit by tying it to something you already do regularly.”

Don’t limit yourself to one type of underwear. “My recommendation is to mix it up,” Masini says, “Unless you’re religiously committed to boxers or briefs, have fun with your underwear and have a little bit of both.” “If you enjoy your underpants, she will, and everyone wins!” Have at least one pair of each color, fabric, cut, and style. Keeping things fresh in the bedroom is one of the nicest things you can do for your relationship, and while your underwear isn’t a cure-all for lousy bedroom abilities, it sure doesn’t hurt.”

There isn’t much to say about this.

Without question, the most fantastic underwear for men is boxer briefs. You get the ideal combination of usefulness, comfort, aesthetics, and sex appeal in one slim package.

Those men are at ease in their own skin (and aren’t ashamed to flaunt it!). They look great in boxer briefs. So who’s to say they won’t look well on you?