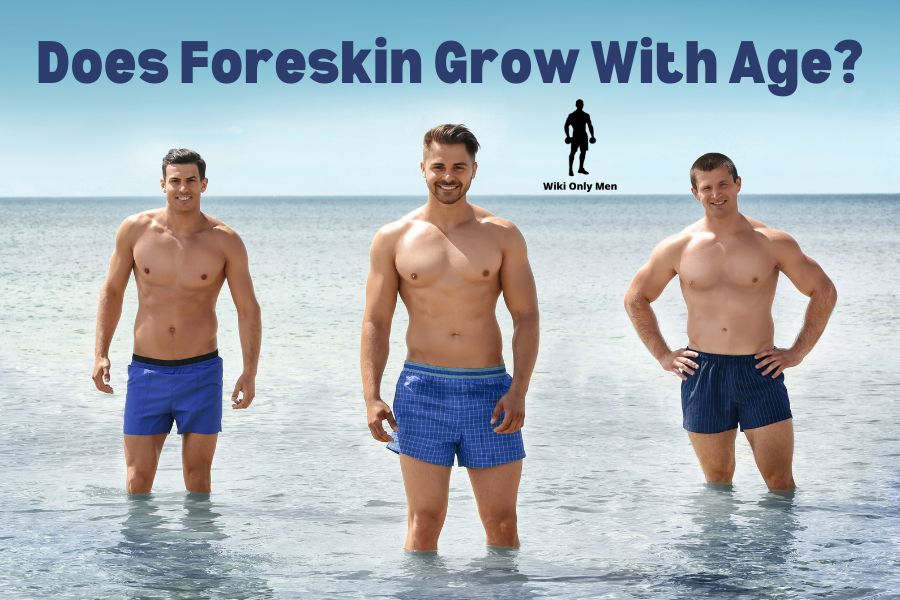 The foreskin of an adult man does not grow with age!

Does Foreskin Grow With Age?

This is a common question people ask healthcare providers if they have any issues with their foreskin. Nonetheless, it is a prevalent belief that the foreskin expands with age. The foreskin, on the other hand, does not increase in size with age after reaching adulthood.

As we age, the foreskin may or may not cover the glans entirely. Some individuals have a foreskin covering all or part of the glans until it is retracted manually or during sexual activity. But others may seem like they have no foreskin during an erection.

Chengzu (2011) referred to this mutation as a ‘prepuce redundant’ abnormality. Adults with a lengthy or “redundant” foreskin should practice regular retraction and clean under the foreskin. When the foreskin is longer than the erect penis, an erection will not cause it to retract.

The glans penis and urinary meatus of the penis are protected by the foreskin, a two-layered flap. Blood veins, neurons, skin, and mucous membranes make up the structure. The foreskin acts as a natural lubricant since it is both pliable and movable.

The glans or penis head is usually retractable in adults, but it is typically bonded to the glans before that. Foreskin length influences the amount of glans coverage in a flaccid and erect condition.

When a child is born, their foreskin is attached to their glans and cannot be retracted. Unless there are other signs, children’s inability to retract the foreskin should not be considered a concern. Retracting a foreskin before it has been released from the glans is not advised.

What Is Foreskin Good For?

Protection, sensitivity, the ability to “glide” during sexual intercourse, and immune system functions with immune cells present in the inner mucosal layer are the four primary functions of the foreskin in maintaining penile health.

What Age Does The Foreskin Grow?

At puberty, male reproductive organs such as the penis and scrotum begin to develop. While the penis is growing, the foreskin is also developing at the same time as it. The usual onset of puberty occurs between the ages of ten and fourteen and lasts until the ages of sixteen and eighteen.

What Happens To The Foreskin When You Get Older?

The skin’s epidermis thins with age because the body’s natural process of producing new skin cells slows down with time. This is since these cells accumulate on top of the foreskin because they can’t be easily shed. This causes your foreskin to become drier and rougher when you get older.

How Long Is A Normal Foreskin?

Its goal is to keep dirt and bacteria out of the urinary tract while protecting the glans, or head of the penis, from abrasions. When erect, the average adult foreskin has 1½ inches of the outer skin and 1½ inches of the inner mucosal lining, for a total length of 3 inches and a diameter of 5 inches.

Do You Lose Inches When Circumcised?

Blood flow to the penile tissues also influences penis size. Removing a layer of skin tissue, the foreskin, has no effect on other penile tissues or the size of your penis when you’re erect. When it’s flaccid, though, it may look slightly less thick.

How Long Does It Take To Regrow Foreskin?

Many circumcised guys are discovering that their bodies can be restored to a more natural, intact state. The method, which relies on the idea that penile skin would expand if it is softly but repeatedly stretched, can be highly effective, although it could take 2 -5 years to finish.

Can I Sell My Foreskin?

What Happens If You Have Too Much Foreskin?

Why Is My Foreskin Turning Black?

The darkening of the foreskin is caused by penile melanosis. It’s usually a harmless or benign condition. The penis is characterized by tiny patches of black skin. Hyperpigmentation is a color shift that happens when melanin (brown pigment) builds deposits in the skin’s surface layer. Penile lentiginosis is another name for penile melanosis.

Should You Keep Your Foreskin Retracted?

The foreskin must not be kept retracted at all times. Some men like to have their foreskins pulled back at all times. They appear to be handling it just fine. But there’s a chance paraphimosis will develop. The retracted foreskin is known as paraphimosis when it gets caught behind the head of the penis (the glans).

Should I Pull Back My Foreskin And Dry It Every Time After Urinating?