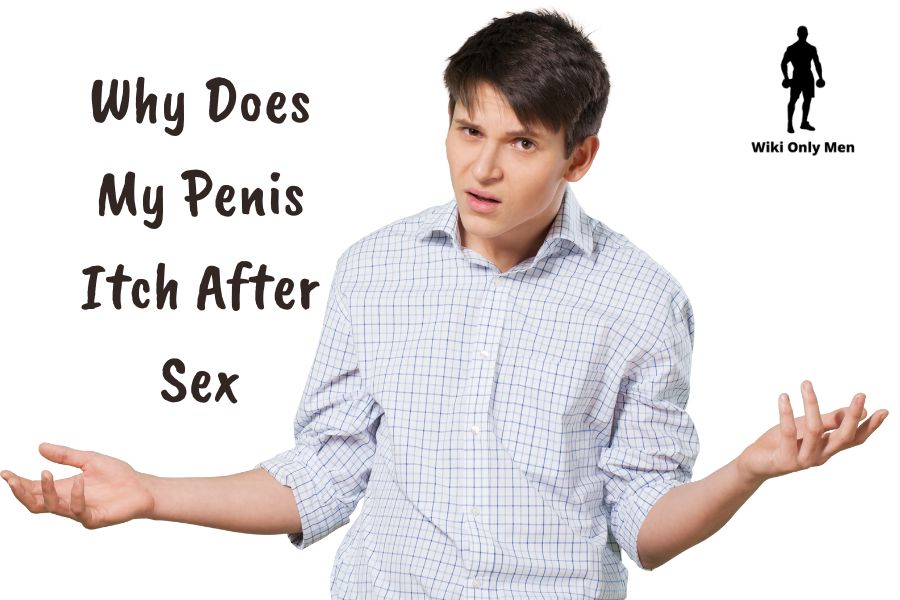 Unfortunately, many men have post-sex itching of the penis. Itching after intercourse can be caused by several things, including dry skin or an allergic reaction.

No wonder – Why Does My Penis Itch After Sex – is a common question!

As long as you seek medical attention, most itching after sex is treatable.

Reasons For Itchy Penis After Intercourse

Rough or inadequately lubricated sex can produce friction burn and an itchy penis due to dry skin on the penis. The symptoms you’re experiencing should subside in two to three days if this is the case.

Penile itching may be caused by one or more of the following conditions.

Using latex condoms can trigger an allergic reaction if you are sensitive to latex. It all depends on how sensitive you are to latex and how much exposure you have had.

According to the Asthma and Allergy Foundation of America, less than 1% of Americans have latex allergies.

Symptoms of a mild latex allergy include:

There are a variety of condoms on the market that aren’t composed of latex. Talk to your sexual partners about your allergy and the best non-latex solution for both.

Latex allergies are usually treated by an allergist (a doctor specializing in allergies). You can avoid having an allergic response by altering your lifestyle and avoiding foods that can cause one.

Thrush can cause itching, pain, and swelling in the head of the penis and the foreskin. A thick, white, lumpy discharge is sometimes produced as well.

Males with a sexual partner who has vaginal candidiasis and those with diabetes are at risk for thrush.

An itching penis is a typical symptom of a yeast infection.

A penile yeast infection can cause a wide range of unpleasant and painful symptoms if left untreated. If the infection spreads to your bloodstream, it can cause life-threatening consequences.

The first sign of a penile yeast infection is a red rash. Then, the penis may appear to have white, glossy spots. Other signs and symptoms:

You may notice an itchy sensation when you have balanitis, a condition that affects your glans (the head of your penis). It can also result in:

Balanitis is more common in case of a lack of personal hygiene. A yeast infection or sexually transmitted disease (STD) may also be blamed for balanitis.

Many minor infections do not need to be treated. However, you may be able to find some medication and home cures to help.

Thrush can be prevented and treated with good personal cleanliness. Follow these guidelines to stay clean:

Poor foreskin cleanliness can lead to the accumulation of smegma, a cheesy-looking material. Smegma can irritate the skin, so cleaning the foreskin is vital.

The following medications may be prescribed by a doctor, according to the CDC:

Antifungal topical creams are used directly to the afflicted area once a day for seven to twenty days.

Another topical antifungal is nystatin. It is available under various brand names; however, it is less efficacious than topical imidazoles.

Various antifungal medications can be purchased online, including clotrimazole, miconazole, and other topical formulations.

Sexually transmitted infections can cause an itchy penis, among other things.

Bacterial: The urinary system is a common route for bacterial invasion, including sexually transmitted infections like gonorrhea and chlamydia. Penile irritation and its accompanying symptoms are frequently caused by bacterial infections.

Viral: For example, herpes, which can cause stinging and blistering, can also induce painful penis lumps due to sexually transmitted illnesses. Human Papilloma Virus (HPV) causes itchy genital warts and is a viral illness.

Many people may not have symptoms of STDs. However, itching is a prevalent one. Penis itching can be caused by a variety of STDs, including:

STIs are severe disorder that requires medical attention. Home remedies can help you feel better by reducing your symptoms, but you still need to see a doctor for proper treatment.

Get checked out by a doctor or sexual health clinic if you have any of these symptoms.

Until the problem is treated, you can perform the following:

Products Used By The Partner

It is a common misperception among males that penile allergies are caused by vaginal fluids. However, certain products used by women may be causing these reactions. For example, these items might include various kinds of lotion, soap, or other types of lubrication.

Sexual intercourse may result in redness or a rash on the penis because of the delicate skin of the penis coming into contact with these irritants.

Discuss with your partner which items cause you to have an allergic response. Those goods should be avoided by your partner.

For the condition to be handled appropriately, medical care is required. Hypoallergenic materials or products free of allergens and perfumes can be used in emergencies.

When couples have sex in a hurry, women often experience a lack of lubrication. Lack of natural lubrication in the vaginal area can also be caused by age and other reasons. As a result, additional lubrication may be required.

Red patches and abrasion of the skin on the penis are caused by insufficient lubrication. As a result, following sex, men may experience itching or a burning feeling in their penis. This type of sexual activity, on the other hand, is more painful for women than for males.

Make sure you’re getting enough lubrication during sex. Water-based lubricants are very safe to use.

If your penis becomes itching after intercourse, coconut oil can help. When it comes to cooking and skincare, it’s a one-stop shop for all things natural. Because it’s non-greasy and moisturizing, it’s ideal for the lower body.

Creams containing corticosteroids can be used. With the help of these creams, inflamed and dry skin can be calmed fast.