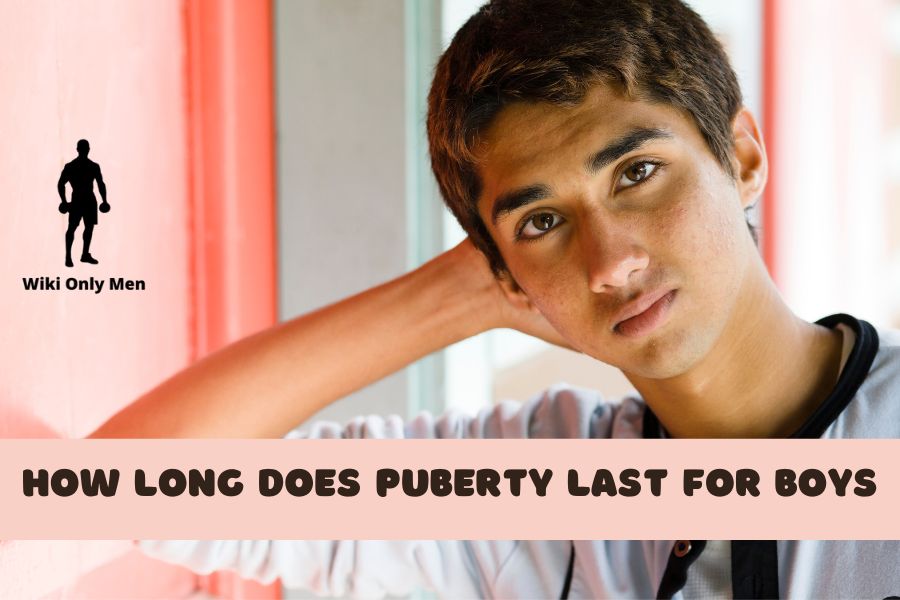 This is a common inquiry by boys and guardians – How Long Does Puberty Last For Boys?

During puberty, a boy’s body goes through several significant transformations. Everyone goes through the process at some point, and while feeling embarrassed or confused is natural, being ready can help.

An alteration in a boy’s intimate area will be the first thing he notices. His scrotum will enlarge, his penis will grow, and he’ll develop pubic hair.

Every person develops at a different rate, and everyone’s puberty starts and ends at various times. Let’s talk about it more.

The first person to recognize the outward signs of puberty was child development specialist Professor James M. Tanner. These phases are now referred to as the Tanner stages or, more accurately, sexual maturity ratings (SMRs).

Even though every person experiences puberty at a different time, they serve as a basic guide to physical growth. According to the Tanner stages in both males and females during puberty, this is what you can anticipate seeing.

Tanner stage 1 represents a child’s development prior to the onset of overt puberty. Typically, it begins after a boy becomes 9 or 10.

The start of physical growth is stage two. The body starts to receive signals from hormones. Males’ testicles and the skin surrounding them (the scrotum) enlarge.

In Stage 3, the body begins to show more signs of change. Most of these shifts in male development start at around 13 years old. Along with a physical growth spurt, adolescent boys’ hormones are working hard, bringing about an overall maturation.

Stage 4 is the climax of puberty. About 14 years of age is a common beginning point for guys in stage 4. Changes consist of:

Your adolescent’s maturation will reach its pinnacle during Stage 5. At the end of this stage, a teen’s body will have finished developing and growing to its full adult height. Stage 5 often begins in males around the age of 15.

Details About Physical Changes In Puberty For Males

Size Changes In The Penis And Testicles

One penis and two testicles make up a boy’s genitalia. The genital region often begins to alter in size and shape between the ages of 9 and 14 throughout puberty.

The scrotum is the area of skin that covers and shields the testicles. The production of the male hormone testosterone occurs in the testicles. Testosterone also promotes other changes in boys during puberty, such as increased hair growth, altered voice, and increased muscle mass.

An adolescent male may first observe enlargement of the testicles or scrotum. While boys are going through puberty, their penis will enlarge and lengthen.

The adolescent male experiences erections as his penis grow larger. As a result of the buildup of blood, the penis becomes rigid and erect.

This can occur when the boy starts fantasizing about sexual things, which can be attributed to the onset of puberty. That, or it could appear for no apparent cause. Nothing unusual here.

The body of a boy starts producing sperm throughout puberty. During an erection, semen, composed of sperm and other bodily fluids, may be discharged. The term for this is ejaculation.

Ejaculation could happen at any time, even when the teen is asleep. It’s a wet dream, to put it simply. To some extent, this is to be expected upon reaching puberty.

Teenage boys can father children after having intercourse because of the process of ejaculation and the subsequent production of sperm.

One of the changes boys will observe as they enter puberty is that they will begin to grow hair in new areas. Boys will develop new hair on their legs, arms, chest, face, and around their penis and testicles.

Boys often use shaving cream and a razor to eliminate this new hair. To learn how to shave correctly and avoid cuts, he should consult an adult first, though.

Puberty is associated with a change in a boy’s voice, often resulting in a deeper, more masculine tone. During this time, the voice may “crack” occasionally. It’s only a temporary problem that will get better in time.

Growth In Height And Muscles

During the puberty phase, known as the growth spurt, most guys will experience a noticeable increase in height. This typically occurs in the later stages of puberty, when other physical changes have already begun, including changes in genital size, hair growth, and voice changes.

It’s not uncommon for some parts of the body—like the hands, feet, and arms—to develop more quickly than others. This could make a teen feel awkward. But no worries – everything will come in shape when the growth spurt is over.

It’s common for girls to begin their growth spurt before boys do, so boys can see that some of the girls in their class are taller than they are. But boys often finish puberty at a taller height than most girls.

Boys should remember that their peers will experience growth and muscle development at varying rates from their own. A person’s genetics, the amount of sleep and exercise they get, the quality of their diet, and the amount of time they spend in the sun all influence how much and fast they grow.

Sweat production increases and becomes more offensive as a boy enters puberty. Eccrine and apocrine glands are the two types of sweat glands found in humans. We’ve had to function eccrine glands ever since birth, but our apocrine glands don’t get to act until puberty kicks in.

Because of its chemical reaction with skin bacteria, perspiration becomes the primary source of unpleasant body odor during puberty.

Oily skin is a common problem among adolescents, and it may get worse as puberty hormones rise. During this time, acne breakouts are also possible. As surprising as it may seem, this is a natural aspect of maturing. Be sure to clean your face and body every day.

Swelling In The Breast Area (Boys)

Some males might experience an enlargement of the chest area. This is due to the body’s response to the ongoing hormonal shifts. Most of the time, this is only a passing phase that many teenage boys go through. If you’re worried about this, you should discuss it with a doctor.

Emotional Changes Of Boys During Puberty

Mood swings are common in preteen boys and might increase as they enter adolescence. They could be feeling happy one moment and then depressed the next. Hormonal shifts throughout puberty create this, so don’t worry.

Boys should be aware of their erratic emotions’ effects on themselves and others. They need to learn how to deal with their feelings of helplessness in a healthy and safe way. Walking outside, talking to a friend, engaging in creative self-expression, and physical activity are all viable options.

Parents, please urge your children to discuss their feelings with a responsible adult such as a family member, school counselor, or physician. Help him realize that he has support from others.

The quality of our sleep has a significant impact on our emotional states. An average pre-adolescent male needs between 9 and 12 hours of sleep per night.

It’s crucial for a boy to develop healthy sleeping habits, and he can do so by doing things like:

Does late puberty make you taller?

No, there is no connection between the start of puberty and your mature height. While genetics has a significant role in determining your final stature. The amount of sleep you get and the food you eat are only two examples of environmental influences that affect your height.

Both boys and girls will experience a growth spurt during puberty and reach their adult height. As a result, guys who were the last to experience puberty will continue to grow taller until they are in their late teens.

When you reach adulthood, does your penis continue to develop?

The penis will expand both in length and width during puberty. The likelihood of continued penile growth after the end of adolescence is low. On the other hand, some people may still be growing their penis in their early 20s.

Unfortunately, at some time in their lives, most people worry about the size of their penis.

I hit puberty, and why do my balls get so itchy?

Boys’ groins, which are close to the penis and testicles and contain sweat glands, can get hot and sweaty, especially after exercise or physical activity. Jock itch is the term used to describe a skin ailment that can affect boys in the groin area. “Jock itch” results in skin itching, irritation, and occasionally red lumps.

Boy can do a few things to avoid this. When possible, they should change into dry underwear after exercising, not share towels; and clean this area with soap and water after each daily shower. It’s simple to alleviate “jock itch.” Medications can be purchased over-the-counter at most drugstores, while some may require a doctor’s prescription.

Adolescence is another name for the teenage period. Teenagers will experience the most growth in both their height and weight throughout this period. Growth spurts and changes brought on by puberty occur during adolescence.

Teenagers often have rapid growth for several months, followed by prolonged growth. They might then experience another growth spurt. Changes brought on by puberty could take time. Or several changes might take place simultaneously.

It’s critical to keep in mind that each youngster will experience these changes uniquely. These maturational indicators may appear in some teenagers earlier or later than in others. And it’s normal for a male to be bigger or smaller than other boys. Every youngster experiences puberty at their own rate.