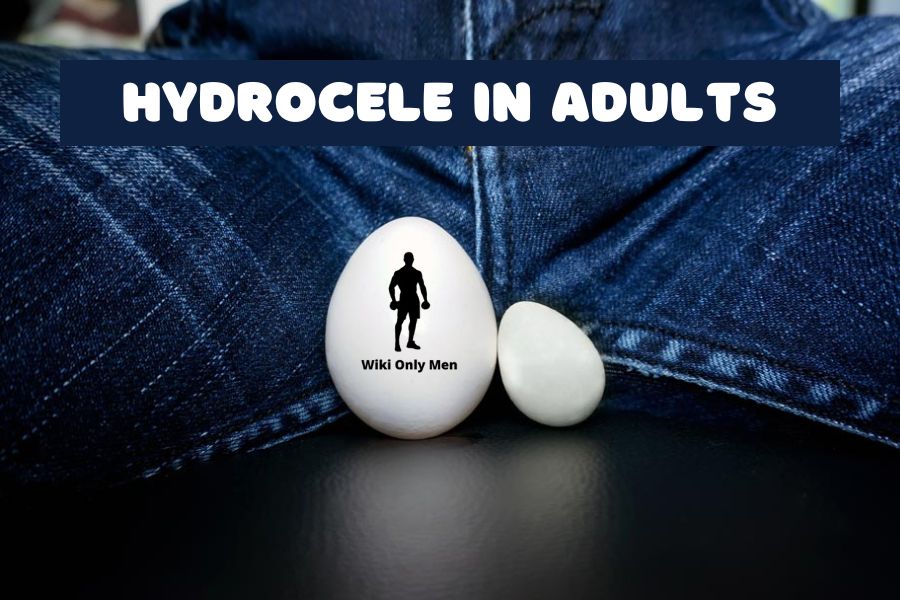 When fluid accumulates in the scrotum, it’s called a hydrocele. The vast majority appear for no apparent cause, are entirely benign, and can be left undisturbed.

Hydrocele in adults, usually in men over 40, can occur. They can be caused by a hernia, albeit this is less typical. Most of the time, it results from either inflammation or improper fluid reabsorption by the sac (known as the tunica vaginalis). Fluid is constantly produced and reabsorbed by the epithelial cells of the sac. But fluid buildup occurs when the sac’s epithelial cells cannot correctly create and reabsorb the fluid.

Inflammation or damage in the scrotum or channel can also result in hydroceles. Epididymitis, an infection, or another ailment could be blamed for it.

If necessary, a minor operation can generally fix the issue. A hydrocele can occasionally be brought on by an underlying testicular issue.

The natural scrotum is malleable, plump, and droopy. Typically two testicles are contained therein. Your testicles are oval-shaped organs that you can feel in your scrotum. Sperm travel from each testicle to the penis via a tube (the vas deferens). One testicle may be lower than the other, which is quite normal.

What Is A Hydrocele?

Hydrocele is fluid accumulation in a sac in the scrotum close to a testicle. A healthy testicle is encased in a sac of flexible tissue. A smooth protective tissue sac encircles the testicle in its normal state. Usually, you can’t feel this.

A tiny amount of “lubricating” fluid is produced inside the sac to enable free movement of your balls.

Usually, extra fluid drains into your scrotal veins. A hydrocele forms when there is an imbalance between the fluid produced and the amount drained.

Hydrocele can develop over both testicles or balls; however, in most cases, it only affects one.

The parasite infection Wuchereria bancrofti is a leading cause of hydroceles worldwide. This species is found naturally across the Americas, Pacific, Middle East, and Africa tropics and subtropics. One estimate has a figure of as high as 20% of the global population is threatened.

Although the infection is contracted as a kid, its consequences, such as elephantiasis and hydrocele, can manifest in adulthood. Hydrocele is a common side effect of filarial infestations, which reduce lymphatic fluid absorption.

Iatrogenic hydrocele causes are more common in nations outside the tropics, like those in Europe and the United States.

How Do Hydroceles Appear And Feel?

A hydrocele manifests as an enlarged, fluid-filled sac in the scrotum. This smooth bump primarily appears in front of one of your testicles.

The size of hydroceles varies widely. Sometimes older men who have never told a doctor about their scrotum swelling get quite enormous hydroceles. It might have been growing over a while.

Hydroceles rarely cause any discomfort. Hydroceles that are very large in size may be uncomfortable. If your balls are particularly enormous, you may find walking or engaging in sexual activity challenging.

Hydroceles are usually innocuous, but they can manifest in various ways according to their stages of development. Common hydroceles can be classified as either noncommunicating or communicating.

When the sac shuts but the fluid is not absorbed by your body, it results in noncommunicating hydroceles. Within a year, the residual fluid is usually absorbed by the body.

Communicating hydroceles develop when the sac enclosing your testicle doesn’t completely seal. This enables fluid to enter and exit.

Common Symptoms Of Hydrocele In Adults

An enlarged scrotum is the most typical sign. However, pain or discomfort may also occur, depending on how severe the swelling is.

In adults, there may be a sense of heaviness in the scrotum. A morning increase in edema is possible. In most cases, the discomfort is minimal. The size of noncommunicating hydroceles typically does not change or changes very slowly.

Also, various medical issues may arise alongside a communicative hydrocele. Communicating hydrocele results in an incompletely closed sac. That fluid can enter and exit the sac indicates that this is the case. Yet a hernia can still form depending on the hole size.

The diagnosis begins with a physical exam, where the enlarged scrotum is felt for soreness.

Hydrocele is diagnosed by shining a light through the scrotum and observing the clear fluid surrounding the testicle. A doctor may run a series of tests on the patient’s urine and blood to find out if an infection is to blame for the hydrocele.

Ultrasound can be done to rule out more serious conditions that might cause scrotal enlargements, such as tumors and hernias.

If the hydrocele is determined to exist after diagnosis, the patient has three options:

Do Nothing At All

If an adult’s hydrocele is asymptomatic, they may choose not to have it treated. Although there is no pain associated with hydroceles, the enlarged balls that result can be rather irritating.

The usage of a prop can significantly improve your level of ease. Scrotums of enormous size may require special underwear.

You can always change your mind and get treatment if it gets too big.

Surgery may be suggested if you have a particularly large or bothersome hydrocele. Hydrocele surgery involves a little incision in the scrotum or lower abdominal wall. Next, the fluid is drained from the area around the testicle.

The tube connecting the abdomen and scrotum will also be closed to prevent the fluid from re-forming. Since this is a relatively minor procedure, patients typically do not need to spend the night in the hospital after having it done.

It is pretty unusual for a hydrocele to recur following surgery.

You just need a needle and syringe to drain the fluid. Yet, it is not uncommon for the hydrocele sac to fill up with fluid again within a few months after this treatment.

After a hydrocele has been drained, sclerotherapy, in which a solution is injected, can be used to prevent a recurrence. This is rarely done but may be offered to those who are not good surgical candidates.

There is little risk associated with hydroceles, and they often do not impact fertility. However, there is a chance that a hydrocele is related to another severe testicular issue.

Infection Or Tumor:  A decrease in sperm count or quality is possible.

An Inguinal Hernia: Life-threatening consequences might arise from the trapped loop of the intestine in the abdominal wall.

Is it possible to treat a hydrocele at home?

Usually, there is no home treatment, but you can leave it untreated. Medical treatment is generally unnecessary unless an underlying problem such as an inguinal hernia is present. However, adults should consult a medical professional if the hydrocele has persisted for longer than six months.

Can a hydrocele be prevented?

There are currently no known methods to prevent the formation of hydroceles. Injuries are the leading cause of hydroceles in adolescents and adults, so it is wise to take measures by wearing an athletic cup when participating in contact sports.

Does cancer develop in hydroceles?

Hydroceles are primarily innocuous, even though they may cause discomfort or embarrassment. But if you notice any unusual swelling or pain, it’s best to get it checked out just to be safe.

Hydroceles rarely cause any health problems and are typically considered harmless. The surgery is also simple. If you are suffering scrotal swelling, however, it is essential to consult a doctor to rule out more severe causes, such as those that can cause infertility, erectile dysfunction, or low testosterone.

According to the most up-to-date scientific data, hydroceles are more common in male infants than in adolescents and adults. Scrotal edema is usually innocuous for most people. Age-appropriate groin protection is recommended for older athletes participating in contact sports to reduce the risk of developing a hydrocele from a testicular injury.

Because of the potential for a hernia to develop, patients with a diagnosis of communicating hydrocele should take an active role in monitoring their symptoms. If the symptoms worsen or become unbearable, it is recommended that you contact a doctor.