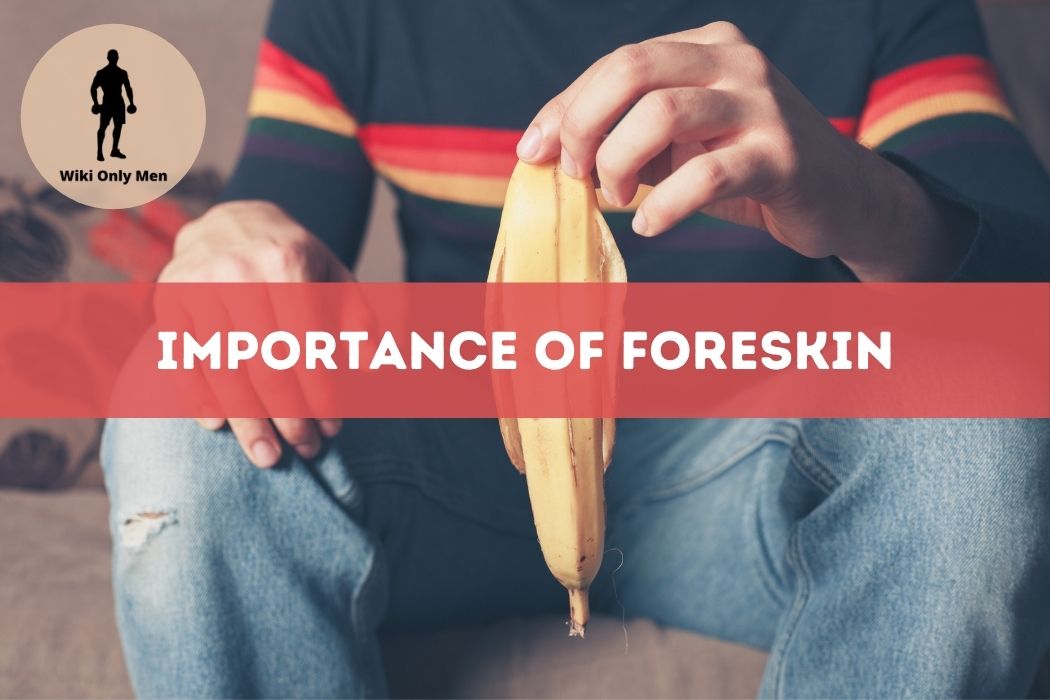 The foreskin is a flap of skin that covers the head of the penis. It’s important because it protects your penis from infection and injury, keeps you naturally lubricated during sex, and makes sex feel better for both partners. Plus, it feels great to have one as long as you know how to take care of it!

All this information can be found in our blog post regarding the Importance of Foreskin.

What Is The Foreskin?

The foreskin is a continuation of the skin from the shaft of a man’s penis and consists of two layers. The outer layer is made up mainly of the normal penile tissue, and an inner mucosal tissue protects and nurtures the glans.

It covers the head of the penis in newborns and, by puberty, usually separates entirely, allowing for easy retraction.

In most males, the foreskin provides about one-third of the skin on their penile shaft, making movement easier and reducing friction during sexual penetration.

So, the human foreskin is a unique, specialized bi-layer tissue. When unfolded on a flat surface, it would look like a butterfly’s wings and take up to 14 square inches (90 square cm).

What Does The Foreskin Do?

The foreskin is a man’s best friend. It protects his penis, provides different sensations and pleasure during sex by adding other nerves and frictionless gliding by extra skin. Finally, it ensures lubrication and immune protection from the immune cells in the inner mucosal layer! So, a total of five significant tasks a foreskin does.

The foreskin is a unique part of your body that offers protection to the head of the penis or glans when it’s not erect.

The foreskin covers the glans at the flaccid stage of the penis. It makes your penis even more sensitive and protects many delicate nerve endings on its head.

Well, you already know the skin of a foreskin is actually made up of layers. As the penis becomes erect during sex, these thin layers lengthen to form an additional tube that enables comfort with the erection and gliding of the shaft skin, thus reduces friction with penetration, leading to more profound pleasure!

The junction between the outer and inner layer of the foreskin on the penis head is covered with special nerve-filled cells – contribute greatly to enhanced sensation during sex.

You may have heard that the head of a penis has as many nerve endings in it as your fingertips, making sex an awesome experience. But, at the same time, the foreskin adds additional pleasure to it, leading many people who have been circumcised as infants or young children to wish they had never undergone this procedure because it leaves them feeling less sensitive and desensitized!

The foreskin is a uniquely sensitive and important part of the male anatomy. If it wasn’t for its immune system functions, then even more infections could occur in this area.

The foreskin on your penis contains proteins called ‘immunoglobulin A’ (IgA), which helps protect you from infection by trapping invading pathogens before they can enter through the urethra into your bladder, where urinary tract infections are common.

The inner mucosal layer also provides protection against sexually transmitted diseases because there are many types of cells, including Langerhans cells and Macrophages, present here. These two kinds help fight off bacterial invaders trying to find their way inside!

Our penises are naturally moistened because it has a natural lubricant called smegma. It is found under your foreskin to keep the glans from drying out or becoming irritated.

The penis head without foreskin becomes dry and rough over time! So don’t be scared when you pull back that skin and see some white substance on your glans; just know all will remain thoroughly moisturized – nice and wet!

Effects Of Not Having A Foreskin

The foreskin has its functions, so you will lose all the benefits of protection, sensation, immunity, and lubrication without it.

A 2013 study found that men without foreskins have less pleasurable sex and orgasm intensity, more effort required to achieve an orgasm. The research also showed unusual sensations were experienced, such as burning, prickling, or itching on the glans penis.

The head of your penis is the most delicate part, so if it becomes exposed to air for too long, it can become dry and rough. This means that you will have a decreased sensitivity that could affect sexual performance and might need some extra lube to penetrate smoothly during sex!

When Do You Need To Remove The Foreskin?

The doctor may remove the foreskin because it is too tight, causing pain during sex, or the hygiene of a non-retracting penis is difficult to maintain. Sometimes more severe conditions like recurrent infections or penile cancer can not be treated without surgery.

Is There Any Relation Between HIV And The Foreskin?

Due to immune cells present in foreskin tissue and its susceptibility to HIV infections, some scientists suggest removing the foreskin to reduce the risk of HIV. However, in reality, it can help decrease the risk of contracting the virus during sex- but not without considering other factors, first!

WHO suggests that circumcision is only helpful in countries with a high risk of HIV in heterosexual people, but it is not the alternative to the safe-sex practice to prevent transmission.

So, safe-sex practices and cleanliness is the key to preventing HIV transmission regardless of whether you have a foreskin or not – why would anyone want to remove this body part being deprived of the benefits it provides?

Now you know the foreskin is indeed a vital part of your penis, and everyone should adequately take care of it. So, men need to maintain the health of their sensitive organs by being diligent about hygiene.

Make sure you keep your own body parts clean, too – it’s not only good for your genitalia but also good for the rest of your body (and those around you).