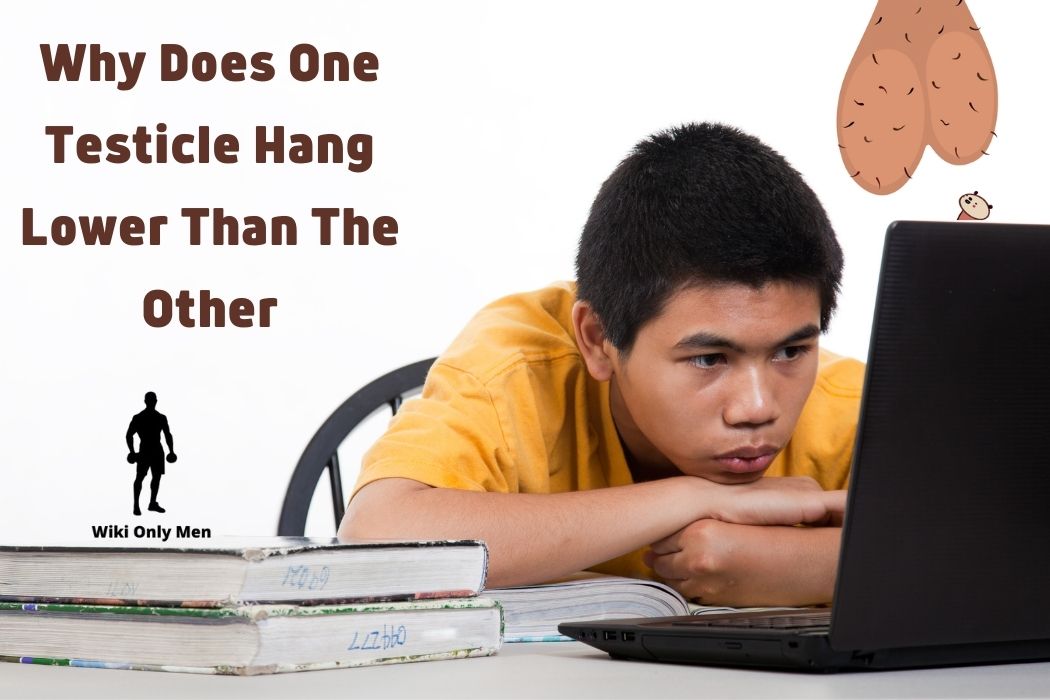 If you don’t scrutinize other men’s testicles regularly, you may not have noticed how widespread this is. Male testicles might have different sizes, and one hangs lower and behind the other. This is quite normal. The right testicle is often larger, but the left one hangs lower than the right in most males.

Why Does One Testicle Hang Lower Than The Other

A lower left testicle than a higher right one can be found in 65 percent of men. As with the right testicle, the left testicle is similarly 7-10 percent smaller in males.

Chris McManus was awarded an Ig Nobel prize for this question. Even though ancient Greek art perfectly portrayed the scrotal asymmetry, a British psychologist found that the Greeks’ anatomical descriptions were far from accurate.

In their faithfulness, Greek sculptors lowered the left ball but inadvertently increased its size in the process. They assumed the testicles served as weights to keep the ducts open when semen was expelled. This was an absurd notion. Initially, it was thought that the left one was heavier than the right one.

Even though we still don’t know for sure why the testes don’t line up horizontally, there are several possible explanations:

According to a study conducted in France, the left and right testicles regulate their internal temperatures in distinct ways. For example, the left has a higher temperature than the right. And they dangle at different levels because they have independent arteries and veins with different lengths, angles, and sources.

It may be helpful to have many semi-independent temperature-regulating mechanisms because sperm are temperature-sensitive. However, researchers have also hypothesized that sperm production would be impaired if twin testes were squeezed together too closely.

Theoretically, the more surface area exposed to the open space, the cooler it will be. Your balls aren’t crushed or overheated because they’re at slightly different heights.

Is It Normal That One Testicle Hangs Lower Than The Other

Your testicles, on the other hand, should never be uncomfortable. The shape should not be completely different, even if one is larger or hangs lower. Doctors are required for any sudden pains or abnormalities in the shape of one of your testicles.

When retractile, the testicle can migrate back and forth between the scrotum and groin. When the retractile testicle is in the groin during a physical inspection, it can be readily guided by hand into its correct place in the scrotum (the bag of skin hanging behind the penis). The testicle will, at the very least, remain in the right place after being released.

The condition of a retractile testicle usually goes away before or during puberty for most guys. In the scrotum, the testicle moves and stays in its proper place.

The retractile testicle can sometimes become stuck in the groin and cannot be moved. An acquired undescended testicle (AUT) is a condition where the testicle ascends rather than descends.

The following are signs and symptoms of a retractile testicle:

(The retracted testicle is distinct from the testicle that has not yet descended (cryptorchidism). Testicles that never made it into the scrotum are known as undescended testicles.

How To Identify Healthy Testicles

Testing yourself often can help you become familiar with the sensation of your testicles and spot any lumps, soreness, tenderness, or changes in either or both testicles. This is known as a “Testicular Self-Examination.”

It is essential to keep your scrotum free during a Testicular Self-Examination (TSE) procedure, not retracted or shrunken.

These are the actions you need to take:

Some Questions That Guys Frequently Ask

When will my testicles begin to grow?

How big are testicles?

On average, an adult male’s testicles grow to a length, width, and depth of 2 inches X 0.8 inches X 1.2 inches. Let’s just talk about the actual volume here, which is roughly 20 ml on average. However, it ranges from 16 ml to 30 ml.

Is it normal to have one testicle that’s bigger than the other?

Yes. Male testicles can vary in size from one another. Right testicles are often larger than left ones. The lower-hanging left testicle is more common than the right.

How do I know if one testicle is bigger than the other?

The larger testicle will always be by a modest margin — around half a teaspoon. You should be able to sit, stand, or walk about without pain. Not even a larger testicle should cause redness or swelling. However, your testicles are egg-shaped, and they are generally smooth with no bumps or protrusions. So any lumpiness is not typical.

Why does my scrotum shrink when I get cold?

The temperature of your testicles must be just correct in order for them to create sperm. As a result, the scrotum frequently changes in shape to maintain the proper temperature for the testicles. You don’t even have to be aware of it to have this happen. Since the scrotum is used to store heat when you’re chilly, your body tells it to shrink.

Why do my testicles hang down?

It is all about maintaining the appropriate temperature for sperm production. When you’re too hot, your body tells your scrotum to loosen up. So your scrotum will enlarge and become more floppy to dissipate the increased heat.

Asymmetrical testicles are not caused for concern. However, consult your doctor immediately if you feel any new pain, redness, or lumps around your testicles. An infection, torsion, or malignancy must be treated quickly to avoid complications.