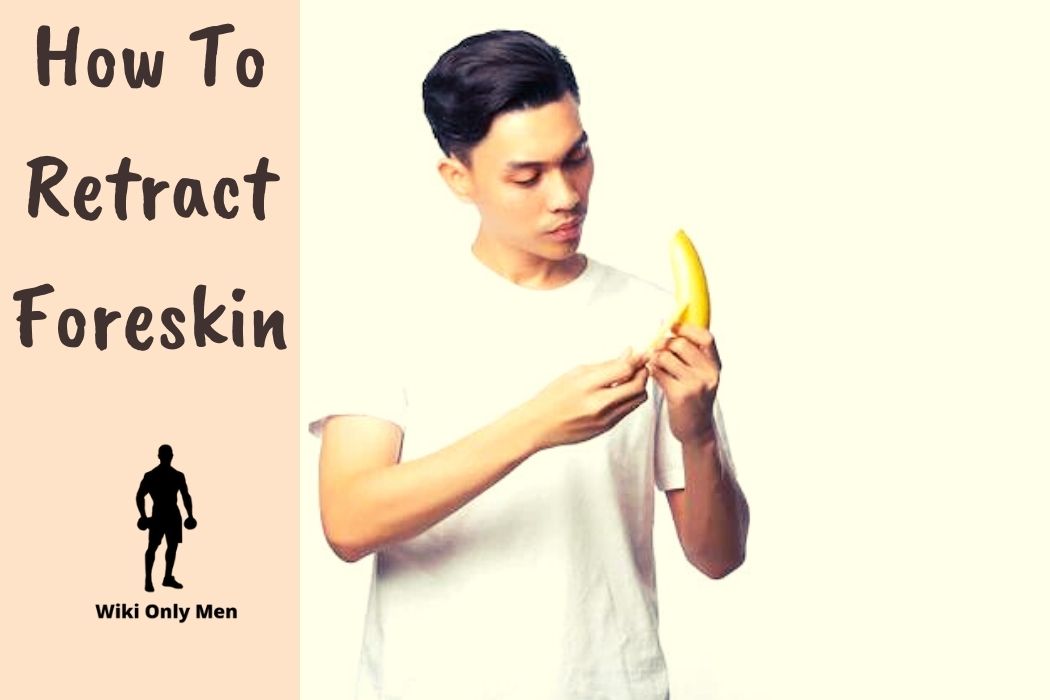 The male penis, or external reproductive organ, is divided into the shaft and the head (called the glans). A foreskin, a layer of skin that protects the shaft and glans, is present in all boys at birth.

The foreskin of an uncircumcised boy will gradually separate from the glans of the penis. You may notice a white, cheesy substance called smegma (composed of skin cells) releasing between the layers of skin as this happens.

White “pearls” may also form under the fused layers of the foreskin and the glans. Which is entirely normal, and these symptoms do not indicate an infection or a cyst.

The foreskin can be pushed back (retracted) to expose the glans of the penis when it separates from the glans. In some cases, the foreskin retracts shortly after birth, while in others, it may take years.

Retraction of the foreskin is possible for some boys as early as the age of five, while others may not be able to do so until they are in their teens.

How To Retract Foreskin Of Young Boys

At the age of 5 to 6, you can begin a modest partial retraction. Using your fingers, gently draw back the skin on your youngster’s penis’s shaft toward his stomach.

The foreskin will elongate, and the glans will be partially visible when you do this. The glans are the rounded heads at the end of the penis.

Take it easy and do it very gently. Neither pain nor tears should result after retraction.

Teach your boy how to retract his own foreskin by the time he turns six years old. Then, teach him to clean below it twice a week while taking a bath. Poor hygiene and related illness can be avoided in this way.

A Different Note On Retracting The Foreskin At Childhood

Some specialists suggest that a parent should never attempt to retract the foreskin of their sons. They also advise against cleaning under the foreskin. They teach that only the boy himself should ever retract his foreskin.

After puberty, this instruction should be given at about the age of 12/13. According to this group of doctors, the foreskin is supposed to spontaneously retract during puberty, which is typically correct.

In Europe, the recommendation against children’s foreskin retraction is more widespread. However, it is a safe bet and prevents excessive or forced retraction.

But the gentle partial retraction for cleanliness outlined in this tutorial is equally risk-free. You should definitely consult with your child’s doctor.

What To Do If I Can’t Retract My Foreskin?

A topical steroid ointment can be used to facilitate retraction and soften the foreskin. The cream should be massaged into the area around the glans and foreskin twice a day for several weeks.

A medical term for this ailment is phimosis. Phimosis usually goes away by puberty; however, it might persist into maturity in certain people. But phimosis has no significant health consequences.

There are conditions connected with phimosis that can cause discomfort, edema, and a lack of ability to urinate, but no life-threatening ones. Circumcision or a comparable surgical procedure may be required in more complex situations.

Prior to attempting to retract your foreskin, remember the following:

How To Safely Stretch Your Foreskin Using Ointment

1. A thin layer of steroid cream should be applied all over the foreskin. It should go all the way around your penis shaft, from the area at the tip to where your foreskin joins the skin lower down.

2. After applying the cream, slowly rub the foreskin tissue to ensure that all creams have been absorbed.

3. Try to pull your foreskin back gently, stopping if you begin to experience pain or discomfort. Once your penis head is sufficiently exposed, apply some cream to the glans of your penis as well.

4. Continue these techniques two to four times a day until your foreskin can completely retract without discomfort. Don’t be afraid if your foreskin doesn’t move after just a few days. This might take anywhere from four to eight weeks.

5. While taking a hot bath or shower, you can also massage your foreskin. The hot water loosens the skin and makes stretching more comfortable.

6. Stretching in the bath and using steroid cream together will help you achieve a more complete foreskin retraction more quickly.

Stretching the foreskin may not be an option in all circumstances. If this happens to you, you should see a doctor, who may suggest one of the following medical or home remedies:

Antibiotics: In the case of bacterial or fungal phimosis, a doctor may prescribe medications to destroy the bacteria or fungi that are causing symptoms like swelling and discharge.

Flucloxacillin (Floxapen) is one of the antibiotics that can be taken by mouth. In other cases, like Canesten’s clotrimazole (Canesten), they are used in the form of creams or lotions.

Circumcision: The foreskin is surgically removed in a circumcision. This is usually the last option if other home remedies or medical treatments have failed.

Due to religious or cultural reasons, an estimated 37 to 39 percent of men worldwide have undergone this procedure.

If the foreskin continues to be overly tight even after treatment, circumcision can be performed on children, adolescents, and adults.

Consistent infections (particularly in the urinary system) or disorders like balanitis, which is linked to the presence of a foreskin, may necessitate circumcision as well.

At what age should the foreskin be pulled back?

Does it hurt to retract the foreskin?

Retraction of the foreskin should only be attempted after the child is five years old. When bathing your youngster, avoid forcefully yanking on his foreskin with your hands. Do it gently! Forcing the foreskin back can cause pain, bleeding, or injury to the skin.

How common is a tight foreskin?

A tight foreskin is common in infant males, but it usually goes away by the age of three. Phimosis or tight foreskin can develop spontaneously or as a result of trauma. Unless phimosis makes urination difficult or produces other symptoms, young boys may not need treatment.

Is phimosis (tight foreskin) normal at 15?

How can I pull back my tight foreskin during erection?

Pulling your foreskin back when you’re erect will follow the same steps as before we described. However, because the foreskin may be considerably tighter or more unpleasant during an erection, you should be gentler and more cautious.

It isn’t uncommon to have a tight foreskin, and at-home foreskin stretching can be an effective treatment.

However, if it doesn’t work after a few weeks and you notice new or worsening symptoms, consult a doctor for therapy to avoid any consequences that a tight foreskin or an infection can create.

When you’re trying to pull your foreskin back, keep these things in mind: