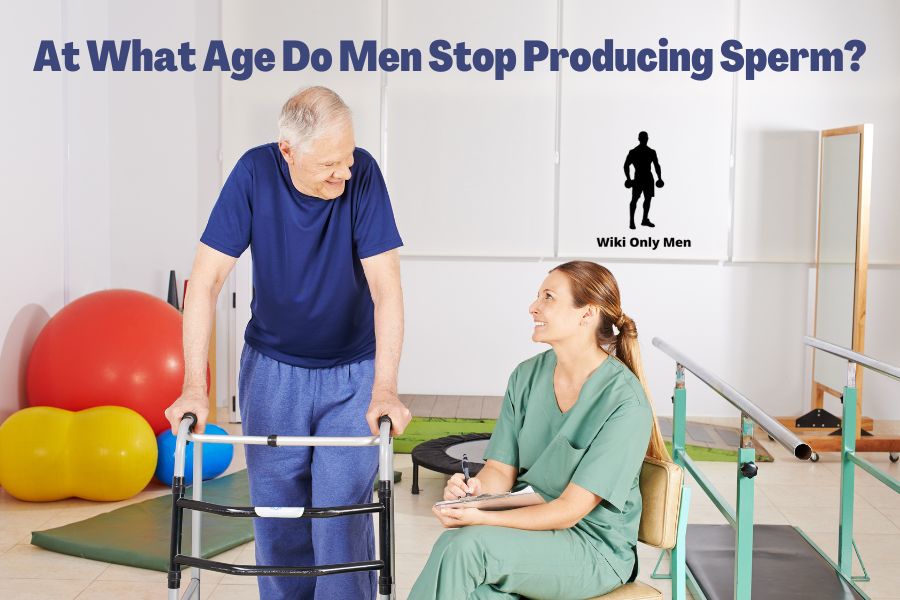 Some men can have children far into their 90s because their testicles can still generate the male hormone testosterone and sperm cells.

Not that men’s fertility is unaffected by their aging, of course.

There is a noticeable drop in the quality of a man’s sperm as he gets older. Count, morphology (shape), and motility are among the standards for healthy sperm established by the World Health Organization (WHO). When a man reaches age 35, his semen parameters may decline.

At What Age Are Men Most Fertile?

Generally speaking, men’s fertility begins to diminish around the age of 35, and the decline continues from there. Men’s fertility may peak between 30 and 35 years of age, but no precise time period has been identified.

It is difficult to know precisely when men are most fertile, but we know that male fertility decline begins at 35 and gets faster at 40.

Another study also found that male fertility begins to fall at age 35 and peaks at 30 to 35.

How Does Age Affect Male Fertility?

One of the most important variables influencing a couple’s ability to conceive and the result of their pregnancy is the father’s age.

As a father gets older, his capability to impregnate a woman decreases. Between their early and mid-to-late 30s, men’s fertility rates will typically decline by 52%.

Males 45 years or older are 12.5 times more likely than men 25 years or younger to take longer than two years to impregnate.

A man’s sperm is thought to accumulate random mutations over time, which can convey genetic alterations to a child and raise the likelihood that they would experience psychiatric or neurocognitive disorders. Studies have shown that older dads may be more likely to have children with schizophrenia, bipolar illness, autism, Down syndrome, or childhood leukemia.

Alternately, some studies have discovered a connection between the sperm of young males under the age of 20 and rises in several birth abnormalities, including Down syndrome, cystic kidney disease, and neural tube anomalies.

How Men Can Protect Fertility As They Age

Less Stress: Manage stress, as stress can reduce sexual function and interfere with the hormones required to create sperm.

Diet: Maintain a balanced diet. Consume plenty of antioxidant-rich fruits and vegetables, which may help increase the health of your sperm.

Loose Underwear: Sperm production may be hampered by an elevated scrotal temperature. Wearing loose-fitting underwear, limiting sitting, avoiding saunas and hot tubs, and limiting scrotum exposure to heated things, such as a laptop, may all improve sperm quality.

Quit Smoking: Low sperm counts are more common in men who smoke cigarettes. Smoking is bad for sexual health and fertility. Ask your physician for assistance in quitting smoking if you do.

Avoid Lubricants: Consider refraining from using lubricants during sexual activity even if more research is needed to determine how lubricants affect fertility. Pre-Seed is an excellent fertility-friendly lubricant, as is baby oil or canola oil.

However, it isn’t a foolproof approach to stave off the decline in fertility that comes with aging. While your sperm is still young and healthy, you can preserve your fertility by freezing sperm for the future. This will give you more alternatives for when and how you want to establish a baby later on down the road.

Can An 80-Year-Old Man Get A Woman Pregnant?

There is a dearth of information regarding men in their late years (80 yr and older). There is a decrease in sperm motility, a sign of viability and fertility, among older men who generate spermatozoa. When a man reaches age 35, his fertility begins to decline.

Yes, as you get older, your testicles make less sperm overall. Your sperm will become less in volume and less effective. Older men tend to have less semen and sperm with lower motility or the ability to swim toward an egg, in addition to having sperm with higher mutation potential.

How Long Does It Take For Sperm To Refill?

At least every 64 days, your body replenishes your sperm supply with new sperm cells. Sperm will always be available at any given time, thanks to this process. Diet and lifestyle have an impact on sperm quality and quantity.

Who Is The Oldest Man To Father A Child?

Mr. Ramajit Raghav, who was 94 years old when he had his first child in 2010, is regarded as the world’s most aged father. Two years later, he and his wife Shakuntala Devi produced another son; he was 96 years old at that time. The farmer is from the Indian town of Kharkhoda, just outside New Delhi.

Are There Any Benefits To Not Ejaculating?

Most published studies have focused on the physical advantages of not ejaculating, although additional research is needed. This isn’t the first time increased testosterone levels have been linked to these consequences.

Sperm motility improved when men abstained for fewer than 24 hours, according to a 2018 review of the latest data.  The more time one goes without ejaculating, the better the consequences will be.

After a week without ejaculating was studied in 2003. On the seventh day, the T levels of the 28 volunteer participants reached their maximum. Men who went three weeks without ejaculating had higher testosterone levels than those who hadn’t done so in a previous study two years earlier.

Millions of men over the age of 40 become fathers each year. Most will participate in a healthy pregnancy, have good sperm, and can conceive spontaneously.

Nevertheless, discussing any worries, you may have with your doctor is beneficial, particularly if you have been trying to conceive for more than a year without success. Men of all ages can get support from a variety of sources.