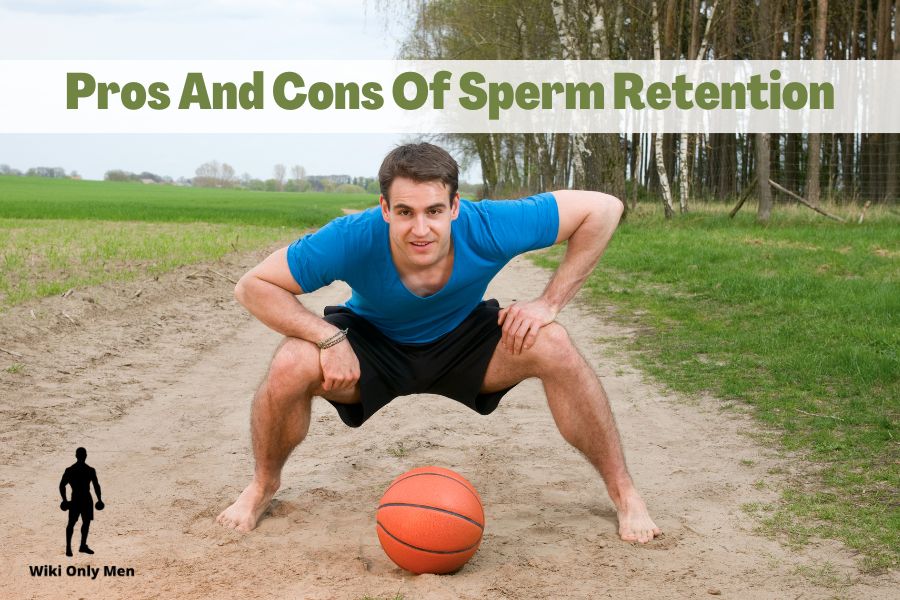 Ejaculation is avoided through the practice of sperm retention. It’s all about harnessing the power of your sexual creativity and putting it to good use.

Some claim that it has dramatic effects on one’s whole well-being on all fronts: sexual, emotional, physical, and spiritual. However, how much of it is based on reality?

Semen retention has both advantages and disadvantages. This article will discuss the pros and cons of sperm retention.

What Is Sperm Retention?

Sperm preservation stretches back to ancient Ayurvedic scriptures and is thought to improve men’s physical, spiritual, and emotional well-being. Coitus reservatus, sexual continence, and semen conservation are all synonyms for semen retention.

A survey found that 58% of men between 20 and 29 reported ejaculating more than three times each week. In contrast, the percentage of men aged 40 to 49 who had three ejaculations each week fell to 32%. Older people saw a continuous reduction in frequency.

It’s common knowledge that orgasm and ejaculation are tied to sexual climax. It’s when you’re feeling your best, most contented self. However, ejaculation occurs in the pelvis, while orgasm occurs in the brain. And avoiding ejaculation is the only way to benefit from the semen retention advantages.

Is It The Same Thing As ‘NoFap’?

Members of NoFap have access to a community forum, as well as reboot challenges and other events. Access to movies, blogs, and podcasts is also provided to members. In addition, they give the members apps to keep track of their days of abstinence and to stay inspired.

How Can Sperm Retention Be Done?

This procedure is not brand-new. Contrarily, it has a long history of Taoist sexual practices. It also exists in other cultures, however, under many titles, such as Sahaja (Hindu Yoga), Coitus Reservatus (Latin), Maithuna (Hindu Tantra), and others. Unfortunately, there aren’t many books or research that provide information about semen retention.

How can you practice non-ejaculatory partner sex?

To ensure that you and your partner are on the same page, talk to each other first. Begin a discussion on limits and reaching each other’s goals.

Talk to them about your plans and how they can assist you. Inquire about how this will affect their pleasure, what they’re willing to do, and what they’re not ready to do.

It can be done similarly to the pause and squeeze method. Pull your penis out of the hole as soon as you feel like you’re about to ejaculate. Squeeze the end of the penis and hold the squeeze for a few seconds before letting go of the pressure. Wait for a few minutes till the urge has subsided.

Personal lubricants and masturbators, when used in conjunction with behavioral approaches, can be helpful.

It will require a lot of work and dedication to learn how to retain semen.

Avoid becoming tense in the muscles of your legs and buttocks. Keep your muscles loose by taking long breaths. Pay close attention to the indications that your body sends you. Recognize your arousal level and the sensations that precede an orgasm.

Orgasm can be held off by using these methods.

Benefits Of Not Ejaculating

According to research, not ejaculating or retaining sperm has several physical advantages.

It should not be surprising that a higher testosterone level is associated with not ejaculating or sperm retention. By taking more T, one might anticipate increases in mood and vitality as well as decreases in body fat. The prevention of ejaculation, according to some experts, may have more immediate effects than previously anticipated.

The more time one goes without ejaculating, the better the consequences will be. In 2003, researchers looked into the advantages of going a week without ejaculating. On the seventh day, the T levels of the 28 volunteer participants reached their maximum.

Sperm quality can be improved, and fertility increased, according to some, by retaining semen. Even yet, there has been a lack of study on this topic to date.

One older study says that a person simply needs to refrain from ejaculating for 1 day to present the best semen samples. Additionally, it advises against going longer than 10 days without having ejaculation.

A new study suggests that the benefits of not ejaculating may show up sooner than you might expect. Abstaining for fewer than 24 hours, according to a 2018 analysis of the most recent data, was linked to better sperm motility.

Mental Benefit Of Not Ejaculating

Proponents of the activity claim that sperm retention inside your balls provides several psychological and emotional advantages. Your daily stress and worry may decrease or disappear, resulting in more motivation for your job, household, or other activities. A renewed sense of self-control is the most apparent advantage of abstinence.

The previously mentioned rise in testosterone levels is the source of each and every one of these advantages. The hormone secretion is decreased naturally by age. When you were younger, and your body was producing the most T, recall how you always felt ready to attack. By not ejaculating frequently, you might be able to regain some of that vigor.

The Spiritual Benefits Of Not Ejaculating

Many men who have stopped or reduced their ejaculation frequency say they are happier and more content with their life. Some claim to have had more meaningful connections with those they care about. As a result, they say, they were able to focus on other aspects of their relationships, such as communication about sex and their life in general.

Your religious beliefs will be strengthened due to NoFAP and semen retention if you’re religious. Because most religions forbid pornography, you will feel more a part of your religion due to NoFAP and no ejaculation, especially if you have no wife. It becomes much simpler and more valuable to meditate.

The sexual lives of many men who have gone long periods without ejaculating have improved.

The technique of edging one’s partner to the point of orgasm before pausing and starting over is well-known. However, a similar approach is applied in ancient traditions like tantric sex.

The International Society for Sexual Medicine has described edging as a way for some men to enhance their enjoyment of orgasm.

A more prolonged, more intense orgasm is the most commonly reported result for delaying ejaculation for a while. However, a small-scale study from 2001 reveals that a person’s neural system may not be highly influenced when they ejaculate if they refrain from ejaculating for three weeks.

Practice in delaying ejaculation may also help last longer in sex for men. People who have early ejaculation may utilize edging-like methods to extend their sexual activity.

In procedures like the start-stop or squeeze techniques, the penis is stimulated to the point of orgasm, then stopped or squeezed until the impulse to ejaculate disappears.

These disappointments can cause people to have decreased libido or sex drive due to these false realities. This is why semen retention and NoFAP training are beneficial.

The ability to focus better than any other species makes humans, and men in particular, exceptional among animal species. Our attention span enables us to overcome challenging obstacles. However, it will be far more difficult to accomplish if your energy supplies are constantly depleted.

Risks Associated With Not Ejaculating

Even though not ejaculating is generally safe, there are a few instances where complications may arise.

These will be explored in better detail in the following sections.

Blue balls, often referred to as epididymal hypertension, can occur when a person is sexually excited, and his penis is erected but does not ejaculate.

Following a time of arousal that does not lead to ejaculation, they may feel soreness or pain in their testicles. Arousal causes an accumulation of blood in the testicles, resulting in this condition.

Older studies imply that it’s a benign disorder that affects a large percentage of young adult men. Most commonly, ejaculation or decreasing arousal are employed in the course of treatment.

Ejaculation problems might develop if a person frequently avoids ejaculating or achieving orgasm. For instance, a person might discover that they can’t orgasm or ejaculate when they want to, or they might experience premature ejaculation. Retrograde ejaculation, which sends semen back into the bladder, may also develop in them.

On the other hand, frequent sex or ejaculation also has certain advantages. Below is a description of them.

Regular sexual engagement in a committed relationship is typically linked to increased comfort and happiness. Some studies, however, imply that the association between increased well-being and increased sexual frequency may have a ceiling.

According to some research, prostate cancer risk appears to be inversely correlated with the frequency of ejaculation.

Even though many people think ejaculating can be wrong, studies frequently show that the opposite occurs. Endorphins are hormones that can effectively eliminate pain and make a person feel good, and they are released by the body after a person ejaculates.

How Long Should Sperm Retention Last?

Online, semen retention offers a lot of satisfaction. People are praising this procedure for treating them with minor health issues, including memory loss, anxiety, sadness, and general exhaustion. And a lot of men vouch for it.

Some people practice sperm retention strategies for a few days, while others do so for several weeks. For every person, it is different.

When To Stop Sperm Retention Practice

If postponing ejaculation causes pain or discomfort, it’s time to cease doing it. If they can’t ejaculate when they want to, they should quit trying to prevent it in the first place.

If a man cannot ejaculate and desires to father biological children, he should consult a doctor since he may require medical treatment. Anejaculation is the medical term for this, and it can be caused by:

After opting to ejaculate, one should not be alarmed if they see blood in their semen. A few days should suffice for this to be cured. However, if someone is worried, they should consult with a medical expert.

There is currently insufficient data to draw any definitive conclusions about the potential advantages of semen retention. There hasn’t been any data, though, to imply that there might be health problems.

Retaining semen is often believed to be beneficial for one’s spiritual and physical well-being. Controlling your ejaculation allows you to conserve what might otherwise be wasted energy.

It can feed the central nervous system energy by preventing the penis from ejaculating. Additionally, many guys assert that it is a miracle cure that can solve all of their problems. Primarily with reduced testosterone, depression, and anxiety.

A person has the option to forego sexual activity for however long they like. To see if they like it, they can also experiment with tantric sex or edging tactics in their sexual interactions.

In the end, there is no one-size-fits-all rule for how often one should ejaculate. As a result, it is up to each individual to discover what works best for them.