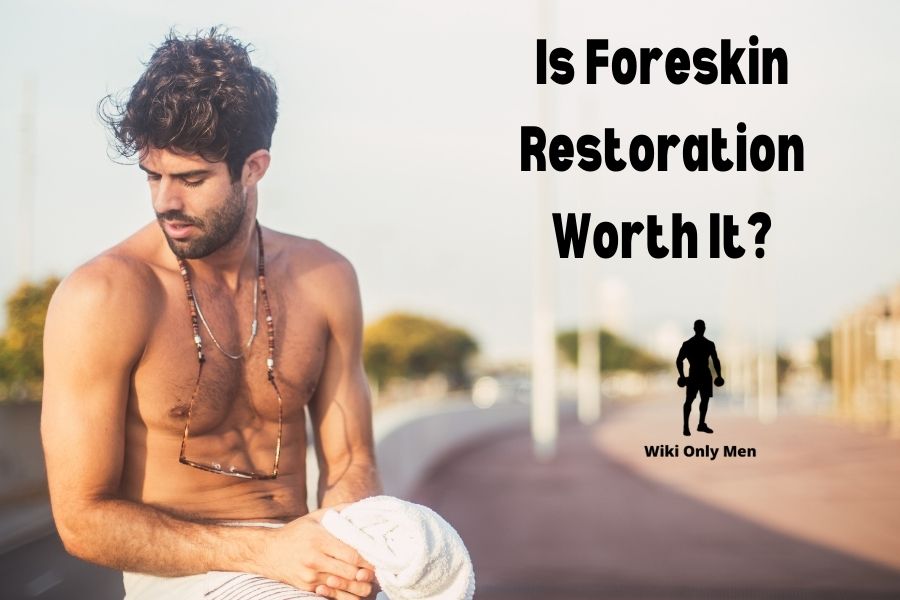 The foreskin is essential to the healthy functioning of the penis. The following is a link to the article: Importance Of Foreskin – Why Do Men Have This Gift?

Some individuals lose their foreskin during childhood due to a surgical procedure called circumcision. This could be done for religious, medicinal, or just cosmetic reasons. In infrequent instances, guys are born without a foreskin!

After having their foreskin removed during circumcision, it is conceivable for someone to alter their mind. The men without foreskins desire the restoration of it. This can be performed through surgical or non-surgical procedures. Is Foreskin Restoration Worth It?

This article discusses whether or not it is possible to restore a person’s foreskin. In addition, we look into the risks and potential benefits of the foreskin restoration techniques that are available.

The male reproductive system includes a cylindrical sex organ called the penis. And men have a loose, retractable coating of skin covering the glans or the top section of the penis, known as the prepuce or foreskin. This outer layer of the skin is responsible for both protecting the penis’s head and enhancing sexual pleasure.

The foreskin is a continuation of the skin on the shaft of the penis. Glans (the rounded head of the penis) are protected and nurtured by an inner mucosal membrane primarily composed of normal penile tissue. As a result, the human foreskin is a bi-layer tissue covering the penis’s head in babies, but it usually separates completely by puberty, making retraction simple.

Surgery or no surgery, restoration is possible. However, even though these treatments can give your penis the appearance of having a foreskin, they are usually incapable of repairing the connective tissues damaged during circumcision.

The practice may be traced back to the civilizations of ancient Greece and Rome, and new approaches have evolved in recent years.

Read on to discover more about the benefits of restoration, how it’s done, and what you may anticipate seeing due to this operation.

Why Do People Restore Their Foreskins?

There are various reasons why you would want to get your foreskin restored. But there is no one-size-fits-all explanation for why someone does anything.

It’s Time To Sex Up

There is some evidence that the foreskin makes the glans (or the head of the penis) more sensitive. As a result, they restore their foreskin with the intent of enhancing sex enjoyment.

When it comes to circumcision, some persons with genitals believe it was done without their permission. They want their foreskin back because they were never given the opportunity to choose whether or not they wanted it.

The restoration of the foreskin and skin addition to the glans may be beneficial. There are several advantages, such as:

In a study published in 2015, researchers looked at the stated benefits of frenulum repair from participants. Circumcision often necessitates the removal of the frenulum, a portion of the penis.

Thirty-one out of the thirty-four patients who underwent the procedure said they felt more sexually satisfied thereafter. So results reveal that 94 percent of the patients were happy with their sex life following the surgery.

[But individuals were not asked about their sexual pleasure prior to the process. As a result, determining the procedure’s actual impact is difficult.]

How Foreskin Restoration Is Done?

Foreskin restoration can be accomplished surgically or non-surgically. A man’s personal choice and the amount of skin necessary to cover the whole glans will determine which option is best for them.

Generally, non-surgical treatments entail extending the penis skin to cover the glans and simulate a foreskin. Skin grafts are a surgical alternative to create a layer of skin around the glans.

Typically, non-surgical approaches are recommended. This is because they are economical, low-risk, and safer than other methods.

Each non-surgical technique relies on the physical expansion of tissue to repair the foreskin. For instance, you can stretch your penile skin to increase its length over time. Additionally, devices worn for several hours per day over several months can be used to enlarge the penile skin until it can cover the glans.

Using tape, weights attached to the skin, balloons, or manually stretching the skin to create tension, a person may be able to achieve this. As a result, the skin extends for a time and may eventually be able to cover the entire glans.

The Foreballs apparatus is a well-known approach. It made its debut in the late 1980s. During the day, it is intended to dangle on the penile shaft skin until it extends to cover the glans. According to its inventor, his skin expanded by over an inch. The dual-tension restorer (DTR) gadget achieves comparable outcomes through pulling.

Another website suggests using your hands to pull the penile skin when you’re both flaccid and erect. But the majority of these statements are empirical, and they have not been supported by clinical research.

According to a 2011 article on strategies for restoring the foreskin, non-surgical stretching may help to expand the skin. However, none of the anatomical elements of the foreskin, such as penile nerves and the frenulum, are restored using these treatments.

To restore the foreskin, skin from the scrotum or other body parts with tissues similar to those of the penis are transplanted onto the penile shaft. Because of this, the penile skin expands and becomes like a foreskin, completely enclosing the penis. When compared to non-surgical methods, surgery can repair the frenulum.

Surgical techniques are effective in some cases. However, they are rarely suggested because of their high cost, complexity, and potential for harm.

To achieve foreskin restoration, researchers in a 2021 Source used a revolutionary process in which surgeons sliced the skin and extended it over the glans. Researchers are also looking into using regenerative medicine to help rebuild the complete foreskin structure and the neural and vascular networks.

The skin used in grafting may differ from your natural penis skin. And, as with any operation, there is the risk of infection, blood loss, and anesthesia-related problems.

Animal penises have been used successfully to test the novel technology of regeneration.

News reports on regeneration suggest that foreskins that have been donated but have had their host cells removed can be surgically grafted onto a male’s penis. The nerves and blood supply of the penis can then be integrated into the new tissue.

There have been no trials to show that this procedure works on human penises. Although foreskins can be generated and kept in the lab, it is unknown if they might be successfully attached to the penises of living men.

Non-surgical restoration: Due to overstretching, abrasion of the penile skin, and abrasive treatment, non-surgical procedures might cause penile or nerve injury. It can also be uncomfortable to stretch the tissues too far or hard.

Before attempting any non-surgical restoration treatments, consult with your doctor. Individual dangers and the best strategy for you can be discussed with them.

Any surgical technique carries these risks.

The time it takes to achieve desired outcomes is determined by various circumstances, including the method used to repair the foreskin.

Non-Surgical: Skin stretching is a time-consuming procedure that might take anywhere from months to years to get the desired result. Furthermore, unlike an original foreskin, the stretched skin will not taper at the tip of the glans. Therefore, a person who wants a similar appearance may need surgery to get it.

Surgical: The intended effect is usually seen right after surgery for surgical options. However, the skin graft’s texture and appearance may differ from the rest of the penis’ skin. This could lead to a decrease in satisfaction.

In a study published in 2021, 37 patients who were followed up after surgery reported no loss of foreskin morphology. Furthermore, none of the volunteers experienced any adverse side effects. However, no impact on sexual activity was assessed by the researchers.

Finally – Is Foreskin Restoration Worth It?

Minor risks are part of any surgical procedure, with no exception for a foreskin restoration surgery. Even if this alternative is pricey, it can restore the foreskin nerves and the feelings one might feel by touching the foreskin.

The non-surgical method is low-risk and low-cost nearly by definition. However, you’ll only get a little more skin to hide your glans if you choose this choice. And this process does not restore the person’s original appearance or sensation.

Talk to your doctor if you’re interested in getting your foreskin back on track. They’ll be able to tell you about the various restoration choices and the associated hazards.

1 thought on “Is Foreskin Restoration Worth It? A Comprehensive Study”