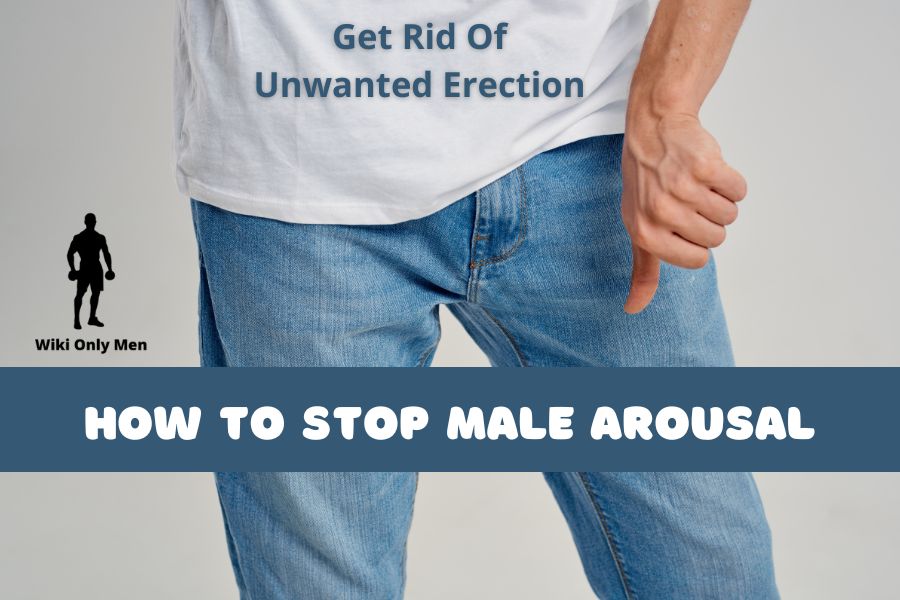 This article is about how to stop male arousal so that you can avoid an unwanted or embarrassing erection.

An Overview Of Erection

Erections begin in the early years of a man’s life, as early as infancy. Most guys have these healthy body functions regularly.

A modest amount of blood moves to the penis during an erection. The penis stiffens due to this action, hormones, muscles, and nerves.

For an adult, the erectile process is influenced by the testosterone hormone. There are various reasons why a guy may experience an erection in maturity. Erections come in a variety of forms, including:

Psychogenic: These occur in response to sexual or romantic thoughts or fantasies.

Nocturnal: During a man’s sleep, these occur. On average, a man has five of them a night, lasting about 30 minutes each.

Many guys experience random, unwelcome erections. They are pretty normal and a sign of good health, although they may cause discomfort or embarrassment in some people.

Tips For Stopping An Erection

The easiest approach to get rid of an erection is to ejaculate. However, climaxing isn’t always achievable when you have an erection. The actions listed below can help you prevent an erection.

The most straightforward course of action might be to wait for the erection to disappear naturally. Sit down, breathe more slowly, and try not to focus on the erection.

Remember that your erection is probably more visible to you than others. Also, it indicates that your genitals are in good health and function. That’s not your fault; it’s just the way things are.

If you have a long-sleeved shirt or jacket, you can utilize that to hide your erection from others. Alternatively, you can hide it by placing a laptop on your lap.

The exciting feelings produced when you need to urinate can lead to an erection. If you urinate, it disappears.

Males, particularly young men, frequently awaken with a boner. This is referred to as morning wood and is entirely natural. Sometimes, this erection is prolonged and difficult to stop. This type of erection usually goes away after urinating.

Thinking about something else is one of the first things you should do to eliminate an unwelcome erection. Avoid considering erection-related or otherwise enticing thoughts. Instead, the following can be helpful:

Preventing the onset of an unwelcome erection can be made easier by keeping your mind occupied.

Sometimes, your attire or how you move or sit might elicit your penis to erect. The erection can be halted by shifting positions and removing the source of stimulation.

Moving around might also assist in masking the erection. Put your hand in your pocket if you have one, then gently adjust the erection. That may also enable you to hide it.

Thinking distracting ideas and clearing your mind both have similar effects. Avoiding thinking about anything sexual or about erection is the main objective. When you ordinarily find a situation stimulating, like a massage or something arousing, meditation can be a helpful strategy to prevent an erection.

Relaxation and stopping an undesired erection are two of the many benefits of meditation.

Breathe regularly and concentrate on your breaths if you’re a beginner at meditation. Focused or concentration meditation is the name given to this technique. Alternatively, you may like to simply repeat one word in your mind. Think about your breathing or the word you’re mentally repeating if you find yourself thinking about your erection.

To make meditation your go-to method for eradicating an erection, make a point of doing so throughout the day. First thing in the morning and last thing at night, meditate for a few minutes.

You can practice meditation with the aid of various guided meditation apps, podcasts, and songs.

Gently exercising can help some men avoid getting an erection to build up. Simple workouts to attempt include walking, jogging, and riding a stationary bike.

Taking a cold shower might help to stop arousal. However, getting in the bath is generally not an option if an erection occurs during a meeting or a date. Arousal may be heightened in some guys by the sensation of water on their skin in the shower. Because of this, it’s best to employ this strategy just if it works for you.

A warm bath works just as well for some guys when trying to stop an erection.

Relaxation and a reduction in arousal are two benefits of a warm bath. In addition, it can make urination easier, reducing the likelihood of an erection developing.

Priapism is a medical term for a highly prolonged erection.

As soon as a guy experiences an erection lasting more than four hours, he should seek emergency medical attention, as he may suffer from the disorder known as priapism.

The tissue in the penis can be damaged by priapism. Without treatment, this can lead to long-term erectile dysfunction. This disorder may also cause painful erections.

Priapism can be treated with medicine or by drained blood from the penis.

Scrotal pain or a feeling of heaviness during prolonged sexual arousal without orgasm and ejaculation is known as blue balls or epididymal hypertension. The name “blue balls” refers to a condition that causes slight pain, discomfort, aching, heaviness, and occasionally a faint bluish hue in your balls or scrotum.

Epididymal hypertension is a temporary condition that can occur when a man has an erection without having had an orgasm in the past.

An orgasm isn’t necessary every time a man develops an erection because epididymal hypertension isn’t dangerous.

An erection is a perfectly normal part of having a healthy physique. Erections can even begin while a fetus is still in the womb. Erections may become less frequent or more difficult to achieve as you get older, depending on your overall health.

Every day, a man is likely to experience multiple erections. You don’t necessarily desire all of them. A man can try patience, diversion, meditation, repositioning, or a cold shower to eliminate an unwelcome erection.

Make it clear to young children that erections are perfectly normal. The penises of many young boys pique their curiosity. They can develop a positive self-perception by exploring their bodies, but you should let them know when and how this is acceptable. If you’re from a different culture, this will be different.

Include the words for penis and testicles in the lexicon of infants and toddlers. A good rule of thumb is to use terms you are not embarrassed to hear someone else use in public.

Before puberty sets in, talk to your sons about it. It is common for puberty to begin between 9 and 14. Your son will be better prepared for the changes that come with puberty if you talk about it with him before the time comes.

Sharing public erection management strategies with your youngster is a good idea. In the event of an erection, help them memorize some sort of poem or song so that they can recite it in their heads. Educate children that erections are normal and a sign of healthiness.

Don’t hold off on asking questions until your youngster does. Start a discussion about puberty, sexual health, and erections. Additionally, it’s crucial to let your kid know they may ask you anything.

Ask your child’s doctor for some discussion points if you don’t feel comfortable discussing erections with your youngster. Additionally, their doctor can discuss erections with them in private, in front of you, or in both situations.