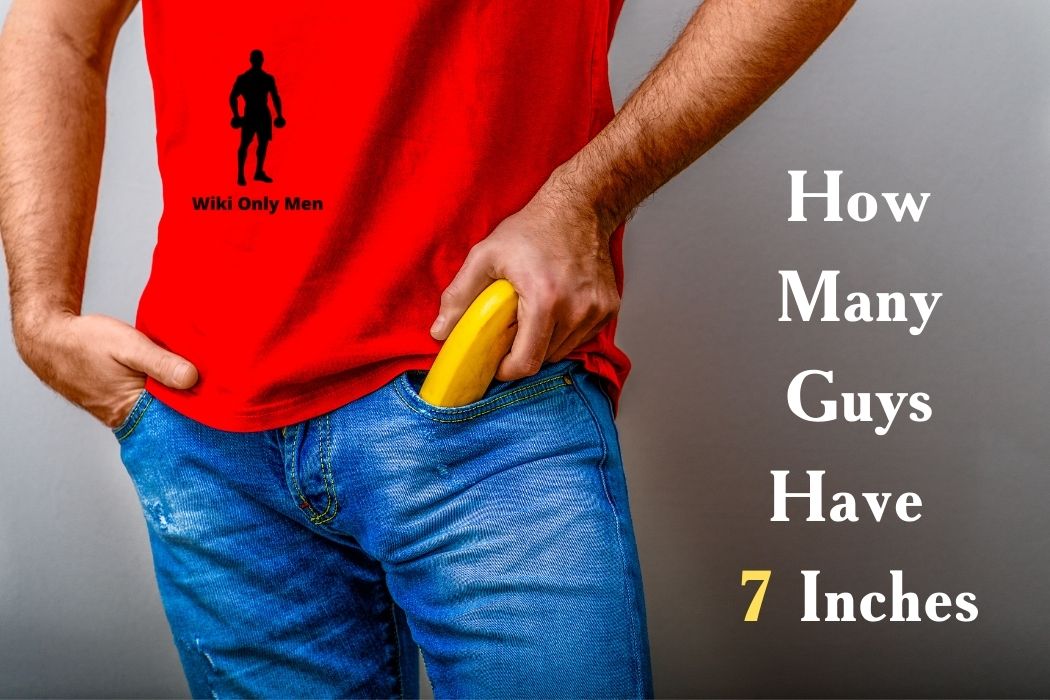 The average size of a man’s penis has always been a mystery. Google returns varied results based on different studies. Confusing! Confusing! In December 2014, BJU International finally performed a comprehensive survey titled “Am I Normal?“. This was a one-of-a-kind investigation of 15521 men of all ages and backgrounds. So, the average penis size across the globe has been calculated.

However, the results of this study fail to show a variation in the size of the penis between races. Condom producers, on the other hand, have found that the average penis size in different countries varies significantly. According to data gathered by worlddata.info, the average penis size varies per country.

So, before you ask how many guys have 7 inches, you should first understand the context of this essay. However, all of these measures were taken using the ‘Bone-Press Method,’ which is also discussed further below.

How Many Guys Have 7 Inches Or More?

It’s an extremely rare occurrence – 1 in 100 men has a penis that measures between 7 and 8 inches erect.

Yes, in terms of comparison. And a 6-inch penis is considered to be above average. However, according to the previously cited study, you’re only somewhat longer than the average erect penis, which is 5.16 inches long.

How Many Guys Have 6 Inches?

You’re in the top 10% in penis length at 6 inches. So it means that a 6-inch penis is only found in one in every ten men.

However, you must take accurate measurements to determine if you are a legitimate 6-inch penis possessor.

But The Measuring Technique Is Vital

Penis length and circumference can be accurately measured in a specific manner.

Penis length may be accurately measured using urologists’ terms for measurements taken with and without pressure on the pubic bone, namely bone-pressed (BP) and non-bone-pressed (NBP).

The bone pressed (BP) method is the most accurate way to gauge penis size since it does not account for the fat pad at the base of the penis in its calculations. Most penile size surveys are done this way.

A ruler or measuring tape is placed on top of the penis, with the base firmly pressed toward the pubic bone and extended from there to the tip of the head to determine the penis’s length using this method.

If you want to know how thick your penis is, wrap a measuring tape around the widest part of it. As an alternative, you can use a ruler to measure the length of a string by wrapping it or another similar item around the same part of your penis.

And Penis Sizes Vary By Ethnicity

Although some studies say that penis size has no effect on race, which is not practical. When it comes to the average size of an ethnic group’s penis, ethnicity impacts.

Race-based disparities in the size of the penis have been found in several recent studies. For example, researchers examined data on penis size from 113 nations in a 2013 publication published in the journal Personality and Individual Differences.

According to the findings, males of African descent had the longest penises, while individuals of East Asian descent had the lowest. Generally speaking, European-born men were somewhere in the middle of the pack. More detailed data on penis sizes across ethnicities is now accessible.

The average size of the penis is ranked according to ethnicity:

The measurements for both length and width vary in the same order meaning the race who has longer penises are thicker at the same time.

Compared to men of other ethnic or racial groups, black or African-American men’s penis lengths are longer, with the largest average of 14.75 cm (5.8″).

By comparison, white or Caucasian penis sizes are only a quarter of a centimeter smaller, at 14.5 cm (5.7″).

One’s Penis Size Cannot Be Predicted By His Ethnicity Only

One must remember that race and ethnicity are not the concluding factors on a person’s penis size. There is a wide variety of sizes within each ethnic group.

For example, there appears to be a wider range of sizes among African-Americans than among Whites and Hispanics, implying more exceptionally huge and small penises among the first group.

Like height and weight, penis sizes can vary significantly amongst males from different ethnic or racial groupings. A combination of genetic and environmental factors, such as food and health, accounts for some of this diversity.

The size of the penis has been measured in several nations and age groups, but none of this research can definitively predict the size of the penis in an individual. As the world becomes more integrated, racial and cultural differences gradually fade. Racial and ethnic genetic distinctions aren’t as obvious now as they used to be when people lived in more isolation.

Depending on the “circumstances,” a person’s penis might become even larger:

Before measuring a man’s penis, researchers have shown that the method used to generate an erection can alter the results. For example, all but one American participant “measured their penis while alone, using hands to erect” in the study stated above.

However, those who “got aroused through oral intercourse reported greater penis size on average than those who acquired erections by imagining”

Honestly, we mean it. 5122 heterosexual and homosexual men were researched between 1938 and 1963 by researchers at the Kinsey Institute for Research in Sex, Gender, and Reproduction (KINSEY).

According to the study results, most homosexual males reported having penises that were a third of an inch longer than those of heterosexual guys.

You can make your penis look bigger than it actually is:

Losing belly fat is the most effective approach to increasing the perceived size of your penis.

Considering that “the more excess fat a man collects, the deeper the penis is buried, leading it to essentially lose length.”

Men’s penises can shrink as a result of smoking cigarettes:

Some men may consider cigarette smoking a “masculine” pastime, but researchers at Boston University School of Medicine showed that smoking cigarettes can reduce a man’s penis by up to a centimeter.

Looking at a man’s fingers could be the secret to guessing his penis size:

The length difference between a man’s ring and index fingers was discovered by researchers at Gachon University in Korea to reflect the length of his penis.

You should expect his penis to be bigger if his ring finger is longer than his index finger!

Scientists have attempted to link the size of a man’s penis to the size of his shoes/feet, noses, thumbs, and even earlobes.

A group of 63 Canadian men was measured in 1993 for their height, foot length, and penis size. “Foot size would not serve as practical estimates of penile length,” researchers concluded, despite finding an association (it was weak, very weak) between larger feet and longer penises.

Another study published in the British Journal of Urology International in 2002 found no statistically significant link between penis length and shoe size in 104 men.

A Nigerian tribe believed there was a link between flat buttocks and long penises, so one study looked into it. But, on the other hand, scientists have since discovered that the total opposite is more likely to be true.

In conclusion, we could just have males wear tights to make their penis size more visible to all, but is a penis size really that vital?